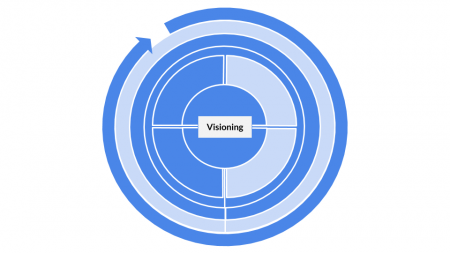 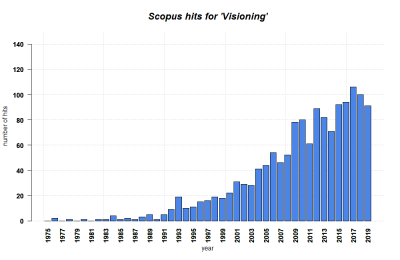 SCOPUS hits per year for Visioning until 2019. Search term: 'visioning' in Title, Abstract, Keywords. Source: own.

Visioning and Backcasting are historically connected and each of them cannot be thought without the other. Backcasting emerged earlier than Visioning during the 1970s and first in the field of energy planning, "(...) growing out of discontent with regular energy forecasting that was based on trend extrapolation, an assumed ongoing increase in the energy demand and a disregard for renewable energy technologies and energy conservation" (Vergragt & Quist 2011, p.748). Subsequently, Backcasting was furthered in this field in the USA, Canada and Sweden (1, 8). The topics approached through Backcasting shifted towards the field of sustainability after the "Our Common Future" report in 1987 (8).

Modern Visioning approaches emerged later during the 1980s and 1990s with the incorporation of System Thinking and participatory engagement (1). Since its emergence and due to a rising role of participatory approaches, different versions of Visioning have been developed, including future workshops, community visioning, sustainability solution spaces, future search conference, visioneering and others (1).

Today, Visioning is used most prominently within planning and planning research where it helps guide investments, politics, action programs (1). Examples for this are energy planning or urban planning (2, 3, 5, 7). It has also become particularly important in transformational sustainability science that tries to directly contribute to real-world sustainability transitions (1). In this field, especially the research body on transition management argues for a combination of social and technological innovation and multi-stakeholder-approaches for sustainable development (3).

In a Visioning process, multidisciplinary stakeholders (either experts on the topic, or non-experts in a participatory approach) are brought together for a workshop to collect ideas and finally formulate a joint vision as an answer to a previously asked question (1, 8). A vision provides “a key reference point for developing strategies to transition from the current state to a desirable future state, actively avoiding undesirable developments” (Wiek & Iwaniec 2014, p.498). This vision can take the form of qualitative or quantitative goals and targets (1). For example, such a vision could be a society based entirely on renewable resources or a technological process that causes minimum environmental impact (2). In theory, a vision can cover every spatial and temporal scale. Visions for the planet in hundreds of years are just as conceivable as a vision for a small company in five years. The exact dimensions depend on the intended goal of the visioning process. The vision itself may exist on a very basic level, e.g. 'a world without hunger'. However, by adding more specific qualitative and especially quantitative targets and elements, the vision may become more complex. This complicates the subsequent Backcastin* process which, based on a systemic perspective, needs to consider various societal and technological elements that influence the intended process of policy-making. (2, 6)

Visioning combines data gathering, data analysis & interpretation: In preparation, sound knowledge of the issues at hand is mandatory which may be developed by analyzing and interpreting existent data on the current state of a particular system (e.g. a country, a company, a landscape) (3, 6). Based on this, a vision for said system is created, generating new qualitative and/or quantitative data. This process can be structured in four steps according to Wiek & Iwaniec (2014).

The Visioning process should continuously be reflected upon and revised iteratively (1). 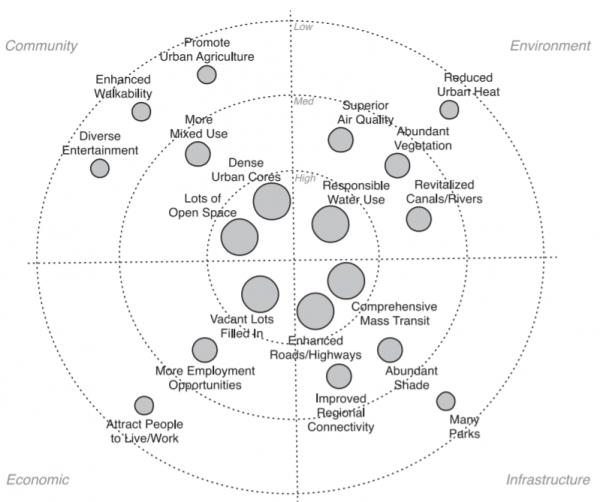 A wide range of possible techniques and settings for vision development is available (6). Among these are abstract forms (vision maps, solution spaces), more realistic visualisations of landscape and city visions using GIS or video techniques; and a set of other visual and digital solutions (decision theaters, digital workshops) (1). More generally, ideas may be collected using e.g. Design Thinking approaches or brainstorming, and sorted through clustering and rating procedures, among others (3). Discussions and thoughts may be secured in form of notes, drawings or voice recordings (5). As per setting, a 'neutral' location (i.e. unaffiliated to specific stakeholders) may be preferable in order not to influence the Visioning process (3). Virtual solutions are possible - bringing people together physically, however, may provide benefits to their interaction that virtual solutions lack (3).

Complementary to the Visioning approach, Backcasting describes the process of developing pathways to reach the vision. While it is thus a method in its own right and not to be understood synonymously with Visioning, these two processes are directly connected to each other.

An example of Visioning and Backcasting

The '1.5°C' goal that was developed at the 2015 COP is a good example of a vision. It is both qualitative (with regards to the connection between humanity and nature) and quantitative (carbon emissions being at net zero). It may not be entirely realistic or probable, but it serves as a benchmark to be achieved. It was developed in close cooperation between policy actors and academia and implicates transformational political, economic and societal action. The latter is done in form of development pathways that can be seen as a result of the subsequent backcasting process.

Visioning is connected to various other methodological approaches.

Everything normative about this method

Visioning is normative from its core - it revolves around thinking about desirable futures (1, 2, 8). What is desirable is a question of cultural, societal and political negotiation (4). This is further complicated by the fact that, in order to create a vision that is shared by and respects all relevant actors, the Visioning process should be participatory and open towards diverse stakeholders' perspectives (1). The question of what is desirable is therefore a very complex one. For more thoughts on the role of normativity in transdisciplinary methods, see the entry on Transdisciplinarity.

The idea of a vision of a desirable future has been criticized in academia as being too impractical and unrealistic (1, 3, 4). However, this difference to probable scenarios may be seen as an advantage, spurring creativity and opening up mindsets (6). It has therefore been claimed that “visions ought to be idealistic, free, open, innovative, and, in fact, not (too) realistic” (Wiek & Iwaniec 2014, p.498). At the same time, they should be internally coherent, plausible and motivational in order to serve as helpful guidance for policy-making (1, 6).

Due to the method's novelty, here is a lack of sound theoretical base and methodology. Visioning is still in its “nascent stage” (Wiek & Iwaniec 2014, p.509) and there needs to be more agreement on its methodological elements. This development of the method may best be furthered in close collaboration between academia and practice (1).

It can however be stated that Visioning and Backcasting may provide essential benefits for Sustainability research in the future. Sustainability Science has been framed to aim for System, Target and Transformation Knowledge and targets real-world problems and their solutions in integrated, participatory modes (see Brandt et al. 2013. A review of transdisciplinary research in sustainability science). To this end, a Visioning process allows for target knowledge, while Backcasting provides transformation knowledge, both in transdisciplinary environments.

Explains the Backcasting process and the role of a vision in this process.

Illustrates four visions for the year 2100 and outlines how one might choose from these.

Present ten quality criteria and a set of tools and techniques for Visioning, including exemplary publications.

Describes the *Visioning* process step by step in an exemplary project and draws conclusions on how the method **may better be implemented in planning practice.

Presents a project combining Visioning with Scenario Planning and other approaches in order to develop pathways for low-carbon cities in Australia.

Illustrates a project in a small US town where citizens were invited to develop visions and, subsequently, strategies for the future of their community.

(4) Constanza, R. 2000. Visions of alternative (unpredictable) futures and their use in policy analysis. Conservation Ecology 4(1).

Retrieved from "https://sustainabilitymethods.org/index.php?title=Visioning_%26_Backcasting&oldid=5054"
Categories:
This page was last edited on 9 April 2021, at 10:50.
Privacy policy
About Sustainability Methods
Disclaimers