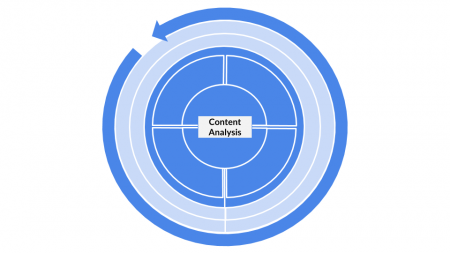 In short: Content Analysis relies on the summarizing of data (most commonly text) into content categories based on pre-determined rules and the analysis of the "coded" data. 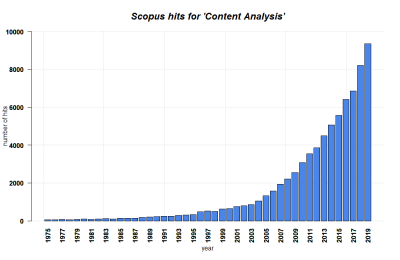 Early approaches to text analysis can be found in Hermeneutics, but quantitative Content Analysis itself emerged during the 1930s based on the sociological work of Lazarsfeld and Lasswell in the USA (4). The method prospered in the study of mass communications in the 1950s (2). Starting in the 1960s, the method was subsequently adapted to the specific needs of diverse disciplines, with the Qualitative Content Analysis emerging from a critique on the lack of communicative contextualization in the earlier purely quantitative approaches (4). Today, the method is applied in a wide range of social sciences and humanities, including communicative science, anthropology, political sciences, psychology, education, and literature, among others (1, 2).

Content Analysis is a "(...) systematic, replicable technique for compressing many words of text into fewer content categories based on explicit rules of coding" (Stemler 2000, p.1). However, the method entails more than mere word-counting. Instead, Content Analysis relies on the interpretation of the data on behalf of the researcher. The mostly qualitative data material is assessed by creating a category system relevant to the material, and attributing parts of the content to individual categories (Schreier 2014). Not only the content of a source is evaluated, but also formal aspects as well as contextual psychological, institutional, and cultural elements of the communication process (1, 4). "[Content Analysis] seeks to analyze data within a specific context in view of the meanings someone - a group or a culture - attributes to them." (Krippendorff 1989, p.403). Because of this, Content Analysis is a potent method to identify trends and patterns in (text) sources, to determine authorship, or to monitor (public) opinions on a specific topic (3).

Apart from text, a diverse set of data can be analyzed using Content Analysis. "Anything that occurs in sufficient numbers and has reasonably stable meanings for a specific group of people may be subjected to content analysis." (Krippendorff 1989, p.404). The data must convey a message to the receiver and be durable (2, 3). Often, Content Analysis focuses on data that are difficult or impossible to interpret with other methods (3). The data may exist 'naturally' and be publicly available, for example verbal discourse, written documents, or visual representations from mass media (newspapers, books, films, comics etc.); or be rather unavailable to the public, such as personal letters or witness accounts. The data may also be generated for the research purpose (e.g. interview transcripts) (1, 2, 4).

While there is a wide range of qualitative Content Analysis approaches, this entry will focus on joint characteristics of these. For more information on the different variations, please refer to Schreier (2014) in the Key Publications. 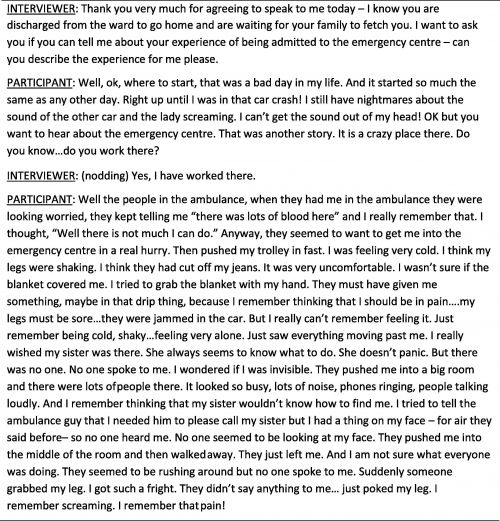 An exemplary interview transcript from a person that was admitted to an emergency center. Source: Erlingsson & Brysiewicz 2017. 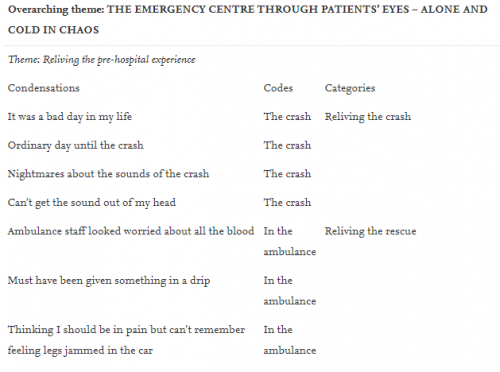 The coding results for statements from the interview transcript above, grouped into one of several themes. Source: Erlingsson & Brysiewicz 2017.

Qualitative Content Analysis is a rather inductive process. The process is guided by the research questions - hypotheses may be tested, but this is not the main goal. As with much of qualitative research, this method attempts to understand the (subjective) meaning behind the analyzed data and to draw conclusions from there. Its purpose is to get hold of the 'bigger picture', including the communicative context surrounding the genesis of the data. The qualitative Content Analysis is a very iterative process. The coding scheme is often not determined prior to the coding process. Instead, its development is guided by the research questions and done in close contact to the data, e.g. by reading through all data first and identifying relevant themes. The codes are then re-defined iteratively as the researcher applies them to the data. As an example, the comparative analysis of two texts can be mentioned, where codes are developed based on the first text, re-iterated by reading through the second text, then jointly applied to the first text again. Also, new research questions may be added during the analysis if the first insights into the data raise them. This approach is closely related to the methodological concept of Grounded Theory approaches.

With regards to the coding process, the analysis units are assigned to the codes but not statistically analysed. There is an exemption to this - the evaluative content analysis, where statements are evaluated on a nominal or ordinal scale, which makes simple quantitative (statistical) analyses possible. However, for most forms of qualitative Content Analysis, the assigned items per code are interpreted qualitatively and conclusions are inferred from these interpretations. Examples and quotes may be used to illustrate the findings. Overall, in this approach, a deep understanding of the data and their meaning is relevant, as is a proper description of specific cases, and possibly a triangulation with other data sources on the same subject.

Retrieved from "https://sustainabilitymethods.org/index.php?title=Content_Analysis&oldid=6418"
Categories:
This page was last edited on 18 October 2021, at 05:57.
Privacy policy
About Sustainability Methods
Disclaimers