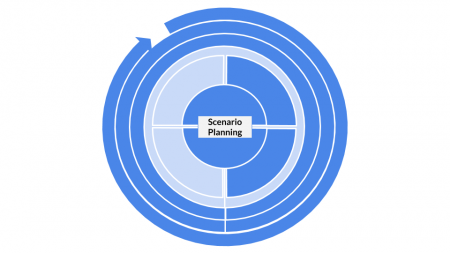 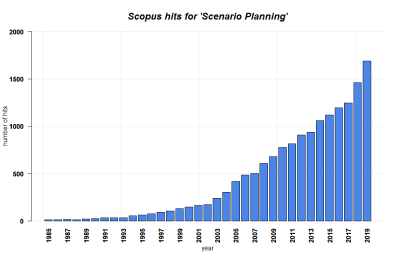 The use of scenarios as a tool for structured thinking about the future dates back to the Manhattan Project in the early 1940s. The physicists involved in developing the atomic bomb attempted to estimate the consequences of its explosion and employed computer simulations to do so. Subsequently, this approach advanced in three separate strands: computer simulations, game theory, and military planning through, among others, the RAND corporation that also developed the Delphi Method. Later, during the 1960s, scenarios were "(...) extensively used for social forecasting, public policy analysis and decision making" in the US. (Amer et al. 2013, p.24).

Shortly after, Scenario Planning was heavily furthered through corporate planning, most notably by the oil company Shell. At the time, corporate planning was traditionally "(...) based on forecasts, which worked reasonably well in the relatively stable 1950s and 1960s. Since the early 1970s, however, forecasting errors have become more frequent and occasionally of dramatic and unprecedented magnitude." (Wack 1985, p.73). As a response to this and to be prepared for potential market shocks, Shell introduced the "Unified Planning Machinery". The idea was to listen to planners' analysis of the global business environment in 1965 and, by doing so, Shell practically invented Scenario Planning. The system enabled Shell to first look ahead for six years, before expanding their planning horizon until 2000. The scenarios prepared Shell's management to deal with the 1973 and 1981 oil crises (1). Shell's success popularized the method. By 1982, more than 50% of Fortune 500 (= the 500 highest-grossing US companies) had switched to Scenario Planning (2).

Today, Scenario Planning remains an important tool for corporate planning in the face of increasing complexity and uncertainty in business environments (5). Adjacent to Visioning & Backcasting, it has also found its way into research. For instance, researchers in transdisciplinary sustainability science gather stakeholders' expertise to think about (un)desirable states of the future and how (not) to get there. This way, companies, non-governmental organizations, cities and even national states can be advised and supported in their planning.

Scenario Planning is the systematic development of descriptions of (typically multiple) plausible futures, which are then called "scenarios". These descriptions of plausible futures may be illustrated with quantitative and precise details. However, the focus lies on presenting them "(...) in coherent script-like or narrative fashion." (Schoemaker 1993, p.195). The scenarios developed in a Scenario Planning process are all "fundamentally different" (Schoemaker 1993, p.195) and may be contradictory and irreconcilable, but there is no inherent ranking between them (2). The core idea is not to present the most probable version of the future, but to get an idea about the range of possible developments of system variables and their interactions (2, 5). Scenarios "(...) are not states of nature nor statistical predictions. The focus is not on single-line forecasting nor on fully estimating probability distributions, but rather on bounding and better understanding future uncertainties." (Schoemaker 1993, p.196).

There is no one procedure for Scenario Planning (5). A commonly cited approach by Schoemaker (2, 3) includes the following steps:
1) Definition of time frame, scope, decision variables and major actors of the issue in question.

2) Identification of current trends and predetermined elements and how they influence the defined decision variables, based on the knowledge of experts and the available data. It should be observed whether major trends are compatible with each other and which uncertainties exist.

3) Construction of extreme future states along a specific continuum (positive vs negative, probable vs surprising, continuous vs divergent etc.) for all the elements or variables. These extremes are then assessed for their internal consistency and plausibility in terms of stakeholder decisions, trends and outcomes.

4) Elimination of implausible or impossible futures and, based on the themes that emerged from these, the creation of new scenarios. This process is repeatedly done until internally consistent scenarios are found. The number of scenarios developed depends on the scope and purpose of the planning process (1, 5).

5) The preliminary scenarios are analysed in terms of which decisions would need to be taken by the key stakeholders to reach them, and potentially revised again when further investigation of these scenarios brings up additional or contradictory knowledge about them. The scenarios may also be transferred into quantitative models to learn about the development and inherent uncertainties of individual variables.

6) Finally, these preliminary scenarios are re-iterated by going through the previous steps again, checking for their applicability to the issue at hand, until finally, scenarios emerge that can be used for planning processes. 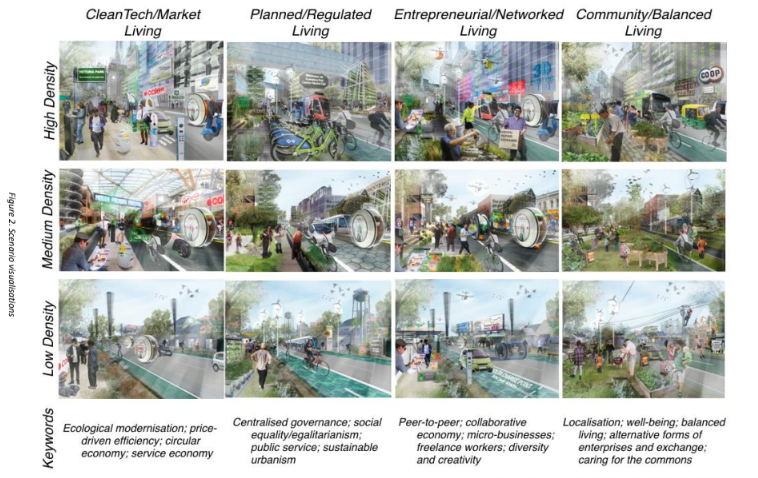 Good scenarios should fulfill a range of characteristics (3, 5): 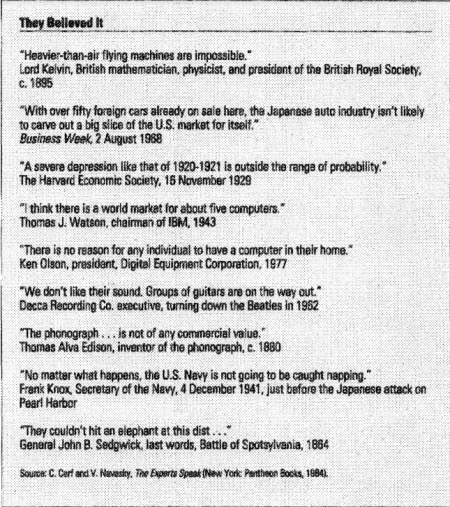 Throughout history, smart minds have underestimated technological, economic and political developments. Scenario Planning can be a mean of addressing the overconfidence in thinking that things will not change. Source: Schoemaker 1995, p.26

Everything normative about this method

It is fair to say that maybe more than ever, a constant of our time is that nothing remains as it is. New developments, such as AI, genetic engineering, environmental decline, space travel and many more, partly unforeseeable (technological) changes make it reasonable to apply more systematic approaches on thinking about the future that challenge our presupposition. Several experts people saw the COVID-19 pandemic coming, others did not, and many countries were not sufficiently prepared for it. Scenario Planning may be one approach that helps decision-makers to plan for states of the future that may arise, and especially to steer developments into the directions of desirable ones (see 1, 5). 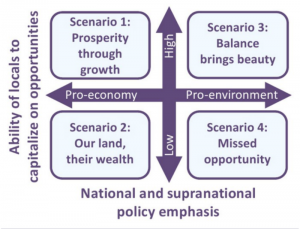 In their 2014 publication, Hanspach et al. (see References) present - among other methodological approaches - the results of a Scenario Planning process they conducted with stakeholders in Southern Transylvania. Here, they conducted workshops with "(...) all relevant ethnic groups, political parties, churches, and schools, as well as local police officers and organizations concerned with nature conservation, regional development, forestry, agriculture, and tourism." (p.34) First, they held individual workshops with each stakeholder group, in which these were asked to present their "(...) understandings of changes in the regions" for the past and the future "as well as of social-ecological system dynamics and key uncertainties" (p.35). The researchers then used the insights from these workshops to create "four plausible storylines describing sequences of social, ecological, and economic changes" for a 30-year time horizon (p.36). These scenarios were developed alongside two axes, which each represented endogenous uncertainties (the ability of the locals to caplitalize on opportunities) as well as exogenous uncertainties (national and supranational policy emphasis).

They received feedback to these scenario drafts in a second round of workshops. Then, they used existent data on social-ecological trends in the region and rated how these trends might develop under each scenario, resulting in scenario maps, which provide a better idea of how the region would change under each scenario. 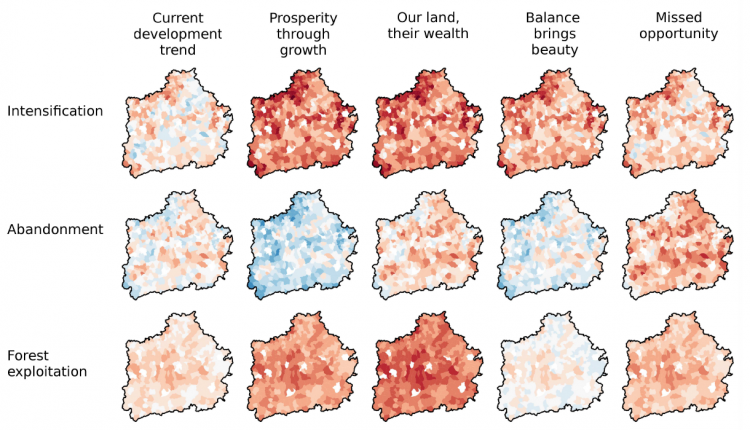 Scenario maps created for Southern Transylvania. Each map shows how a specific social-ecological trend (three out of eight are shown) develop under one of the four scenarios. Red = likely, blue = unlikely. Source: Hanspach et al. 2014, p.38

Further, visual representations (drawings) of the four scenarios were created to support imagination of what they would mean for the region. 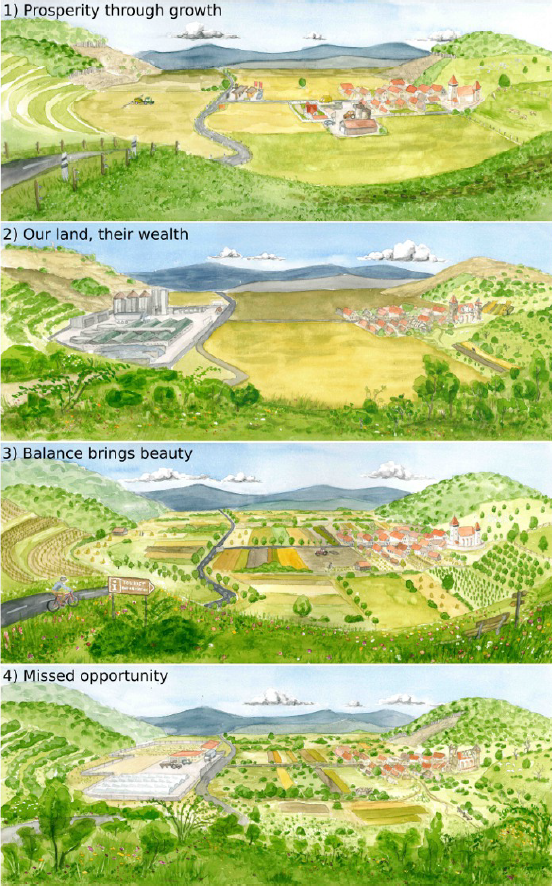 Overall, the results of the scenario planning process and the analysis of the scenarios shows how this method can help identify the most important impact factors on future developments of a system and how distinct potential developments influence specific aspects of the system. It also becomes clear how this method can facilitate policy responses and how scenarios are a helpful form of communicating scientific data.

(7) Hanspach et al. 2014. A holistic approach to studying social-ecological systems and its application to Southern Transylvania. Ecology and Society 19(4). 32-45.

Retrieved from "https://sustainabilitymethods.org/index.php?title=Scenario_Planning&oldid=6136"
Categories:
This page was last edited on 28 July 2021, at 09:26.
Privacy policy
About Sustainability Methods
Disclaimers