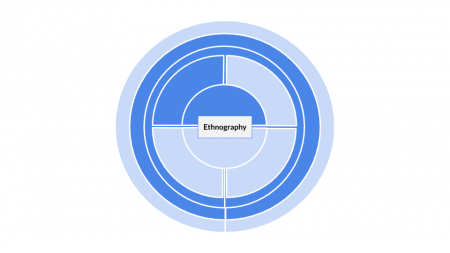 Annotation: Ethnography is both a process and an outcome - the final written product - of qualitative research (3). This article will focus on the process, giving an overview of different kinds of ethnographic research and its correlating methods. 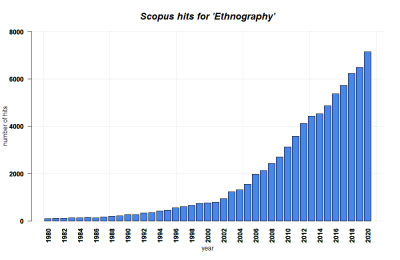 Ethnography can be regarded one of the most important qualitative research methods that looks back on a long tradition but also many transitions. The foundations of modern Ethnography reach back about a hundred years. Until 1900, ethnographic information mostly originated from the collection of anthropological artifacts and descriptions of indigenous communities that were collected and reported by amateurs, e.g. missionaries or travellers, and subsequently evaluated by 'armchair' anthropologists. By the beginning of the 20th Century, then, anthropologists began to go into the field and get in contact with people themselves instead of relying on second-hand information (1).

An influential figure for the subsequent development of Ethnography was Bronislaw Malinowski, a Polish anthropologist who is considered to be the founder of fieldwork and participant observation methods relevant to Ethnography to this day (1, 8). He invested himself in 'classical' ethnographic work, spending months with a Melanesian community and gathering insights that he published in his 1922 work "Argonauts of the Western Pacific". He systematically recorded and later taught his approach to fieldwork, which heavily furthered the methodological foundations of anthropology (1).

The methodological approach to Ethnography was further influenced by the early 20th century work of the Chicago School of sociology, which is also responsible for major developments of interview methodology (see Open Interviews and Semi-structured Interviews). Sociologists in Chicago attempted to study individuals within the city by observing and interviewing them in their everyday lives, and furthered the methodological groundwork for the field this way (1).

Overall, Ethnography is historically and practically most closely related to the discipline of Anthropology and constitutes a defining method of this discipline (8). Still, the theoretical reflections and methodological approaches also apply to research endeavours in other Social Sciences. Today, Ethnographic research no longer focuses on investigating 'exotic' communities, but deals with a diverse range of topics, including media studies, health care, work, education, communication, gender, relations to nature, and others (7, 9).

Ethnography as a research approach

Ethnography is not strictly a method, but rather a "culture-studying culture" (Spradley (2), p.9). It is a scientific approach to how research should be conducted that includes a set of methods, but also a set of theoretical considerations on how to apply these methods (1). Ethnography attempts to understand the social world and actions of human beings in a specific cultural and societal surrounding of interest to the researcher (8). The researcher intends to systematically describe this culture and understand another way of life from the 'native point of view' (Spradley (2), p.3). "Rather than studying people, ethnography means learning from people." (Spradley, p.3). According to Malinowski, three aspects are of interest to the researcher: what people say they do (customs, traditions, institutions, structures); what they actually do; and typical ways of thinking and feeling associated with these elements (1). The latter may be expressed directly by the studied individuals, but may also be tacit knowledge, i.e. knowledge that is inherent to the culture but taken for granted and communicated only indirectly through word and action (Spradley (2), p.5). Ethnographic research attempts to infer this knowledge by listening carefully, observing and studying the culture in detail (2, see below).

The term culture "(...) refers to the acquired knowledge that people use to interpret experience and generate social behavior." (Spradley (2), p.5). In this regard, not only 'exotic' enclosed societies such as the indigenous community studied by Malinowski are of interest in ethnographic research, but also small-scale cultures such as a classroom, a family or a restaurant (3). 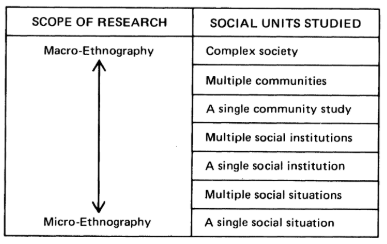 Methodologically, Ethnography is special due to its focus on field work, i.e. gathering data within the context that is to be studied. It is important here that ethnographers immerse themselves in the daily praxis of the context they are studying to gain a 'native' perspective (1). Ethnographers immerse themselves in the social situations they study, and attempt to openly engage with the activities of the daily lives of the individuals of interest while asking them questions, observing, listening to and interacting with (8). Field work can therefore include a wide array of activities, such as"(...) asking questions, eating strange foods, learning a new language, watching ceremonies, taking field notes, washing clothes, writing letters home, tracing out genealogies, observing play, interviewing informants, and hundreds of other things." (Spradley, p.3). The researcher acknowledges the complexity of the social world and attends the studied situation for a substantial period of time to build trust and get acquainted with the individuals involved (1, 3). (Learning and) speaking the native language is an important part of the participation process (8). Participant observation is the primary method throughout this process. The researcher systematically observes situations according to his/her (current) research questions and takes mental and written notes (10). A diary may be kept to reflect upon the research experiences. Since it is not always clear from the beginning which information may be of interest, the researcher needs to find a balance between noting everything worthwhile and still finding sufficient time to actually conduct the research (1). 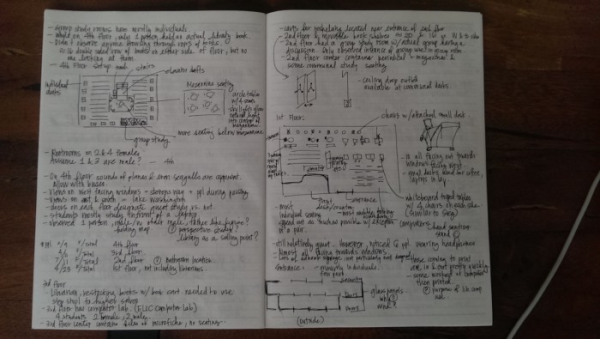 Observations are often supplemented by qualitative ethnographic interviews to gain a deeper understanding into previously observed situations. These are a form of open interview that focus on how the interviewees classify and describe their experiences and positions concerning their social context. Interviews may take place in-between observations, or in dedicated, set-up interview situations, and also with groups of interviewees (1). The Interviewees may be asked about broad or specific situations. Elements that may be learned about are: people involved, places used, individual acts, groups of acts that combine into activities or routines, events, objects, goals, time and feelings (4). The ethnographic interview differs from standard open interviews in that it tries not to impose any pre-conceived notions and structures on how the interviewee might view, define or classify these elements according to his/her worldview. Instead, the questions are formulated so that the interview is almost entirely guided by the interviewee's responses (1, 5). This way, the researcher may be able to extract insight into "(...) contextual understandings, shared assumptions and common knowledge upon which a respondent's answers are based (...). Ethnographic questions are used to elicit the perceptions and knowledge that guide behavior, while discouraging individuals from translating this information into a form corresponding to the researcher's revealed understanding and language." (Johnston et al. 1995, p.57f). In such an interview, the power relation between researcher and interviewee is shifted, because the researcher does not have much that he/she wants to learn about, but the interviewee has all the information to offer that is of interest to the researcher. Therefore, a trustful relationship between the researcher and the interviewee is of special importance (4, see Normativity).

Ethnography is thus a very open and inductive process, with the researcher acting like an explorer who does not rely on strictly pre-defined questions leading his/her research, but rather goes into the field openly and develops new questions as the first results emerge from the data collected after some time (1, 3, 8). In this reflexive practice, the research design continuously evolves during the study. The research is done in a circular process, which sets ethnographic research apart from classical theory-led, linear social science approaches (3, see Figure below). The scope of the research is decreased with every circulation: In terms of the research questions, the researcher first asks rather general descriptive questions about the situation at hand. The data is analyzed and based on the results, the focus is narrowed down: next, structural questions are asked, before contrast questions are used in the next step to further reduce the scope of the research design. The same applies to the data collection: Initially, the observations are rather descriptive, but become more and more focused and selective as the ethnographic research continues (3)

The data gathered in Ethnography may be quantitative (e.g. statistical summaries of specific actions), but are primarily qualitative, e.g. photographies, audio files, maps, descriptions of phenomena, structures and ideas, or even objects (1, 9). Overall, therefore, ethnographic methodology may be defined as qualitative and inductive, focusing on the present individual while allowing for inferences on the past and the whole societal system that is observed.

The focus of Ethnography on gathering data in the 'natural' context is crucial for the quality of the results. Being in the very situation and watching what people do and learning about their thoughts on the situation as it happens allows for more insightful conclusions. The alternative - having individuals report in a dedicated, external setting, before or after the situation happening - might be biased since people do not always do what they say they do (1). For further challenges, see Normativity.

The book "Digital Environments' (6) reflects upon the future development of digital anthropology in the face of the increasing role of 'digital environments' as a sphere for social interaction, which raises new methodological challenges for researchers investigating communities in this field.

Brewer (2001) claims that "(...) [g]lobalization poses a threat to Ethnography", stating that "[l]ocal 'fields' as sites for interesting and innovative social action and particularistic social meanings, which ethnography once explored, get subsumed under the homogenization that occurs with globalization. Globalization creates a cultural glob in which there is no space for difference, and thus for ethnography's stress on bounded fields as sites for localized social meanings." However, he sees a future for Ethnography in this regard: "]E]thnography's role under globalization is to: chart the experience of people in a local setting to demonstrate how global processes are mediated by local factors; address the persistence of tradition; describe how traditional identities interface with globally structured ones." The role of Ethnography under globalizational processes may change, but the method must not become obsolent.

Malinowski, B. 1922. Argonauts of the Western Pacific. An Account of Native Enterprise and Adventure in the Archipelagoes of Melanesian New Guinea. Routledge London, New York. Available at http://www.bohol.ph/books/Argonauts/Argonauts.html (last accessed on 15.07.2020)

Retrieved from "https://sustainabilitymethods.org/index.php?title=Ethnography&oldid=5936"
Categories:
This page was last edited on 30 June 2021, at 12:56.
Privacy policy
About Sustainability Methods
Disclaimers