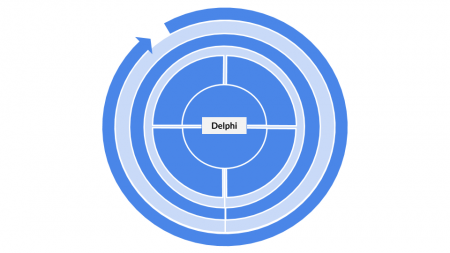 In short: The Delphi Method is an interactive form of data gathering in which expert opinions are summarized and consensus is facilitated.

The Delphi method originates from work at RAND Corporation, a US think-tank that advises the US military, in the late 1940s and 1950s (2, 3, 5). RAND developed "Project Delphi" as a mean of obtaining "(...) the most reliable consensus of opinion of a group of experts." (Dalkey & Helmer 1963, p.1). At the time, the alternative - extensive gathering and analysis of quantitative data as a basis for forecasting and deliberating on future issues - was not technologically feasible (4, 5). Instead, experts were invited and asked for their opinions - and Delphi was born (see (1)). 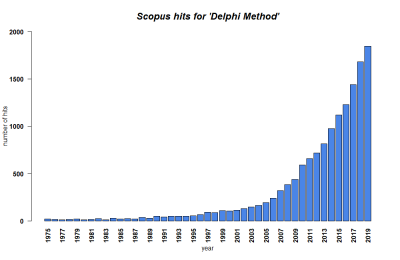 In 1964, a RAND report from Gordon & Helmer brought the method to attention for a wider audience outside the military defense field (4, 5). Subsequently, Delphi became a prominent method in technological forecasting; it was also adapted in management; in fields such as drug policy, education, urban planning; and applied in order to understand economic and social phenomena (2, 4, 5). An important field today is the healthcare sector (7). While during the first decade of its use the Delphi method was mostly about forecasting future scenarios, a second form was developed later that focused on concept & framework development (3).

Delphi was first applied in these non-scientific fields before it reached academia (4). Here, it can be a beneficial method to identify topics, questions, terminologies, constructs or theoretical perspectives for research endeavours (3).

The Delphi method is "(...) a systematic and interactive research technique for obtaining the judgment of a panel of independent experts on a specific topics" (Hallowell & Gambatese 2010, p.99). It is used "(...) to obtain, exchange, and develop informed opinion on a particular topic" and shall provide "(...) a constructive forum in which consensus may occur" (Rayens & Hahn 2000, p.309). Put simply, experts on a topic are gathered and asked in a systematic process what they think about the future, until consensus is found. 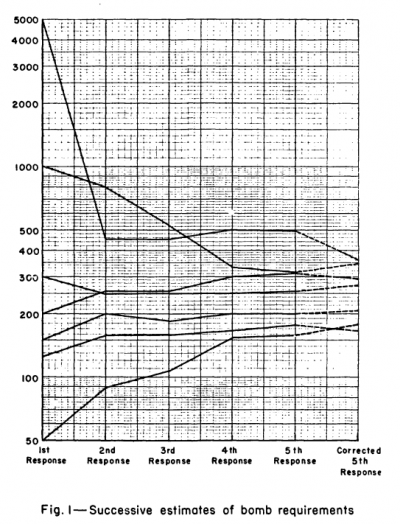 Questionnaire results for the original RAND study, asking for an estimate of bomb requirements. The estimated numbers per participant converge over the course of the Delphi procedure. Source: Dalkey & Helmer 1963, p.15

1. A group of experts / stakeholders on a specific issue is identified and invited as participants for the Delphi. These participants represent different backgrounds: academics, government and non-government officials as wel, as practitioners. They should have a diverse set of perspectives and profound knowledge on the discussed issues. They may be grouped based on their organizations, skills, disciplines or qualifications (3). Their number typically ranges from 10 up to 30, depending on the complexity of the issue (2, 3, 5, 6).

The researchers then develop a questionnaire. It is informed by previous research as well as input from external experts (not the participants) who are asked to contribute knowledge and potential questions on the pertinent issue (2, 5). The amount of consultation depends on the expertise of the researchers on the respective issue (2).

2. The questionnaire is used to ask for the participants' opinions and positions related to the underlying issue. The questions often take a 'ranking-type' (3): they ask about the likelihood of potential future situations, the desirability of certain goals, the importance of specific issues and the feasibility of potential policy options. Participants may be asked to rank the answer options, e.g. from least to most desirable, least to most feasible etc. (2). Participants may also be asked yes/no questions, or to provide an estimate as a number. They can provide further information on their answers in written form. (8)

The questioning is most commonly conducted in form of a questionnaire but has more recently also been realized as individual, group, phone or digital interview sessions (2, 5). Digital questioning allows for real-time assessments of the answers and thus a quicker process. However, a step-by-step procedure provides more time for the researchers to analyze the responses (4).

3. After the first round, the participants' answers are analyzed both in terms of tendency and variability. The questionnaire is adapted to the new insights: questions that already indicated consensus on a specific aspect of the issue are abandoned while disagreements are further included. 'Consensus' may be defined based on a certain percentage of participants agreeing to one option, the median of the responses or a degree of standard deviation, among other definitions (2, 5, 6, 7). New questions may be added to the questionnaire and existing questions may be rephrased based on the first set of answers (4).

Next, the experts are again asked for their opinions on the newly adapted set of questions. This time, the summarized but - this is important - anonymous group results from the first round are communicated to them. This feedback is crucial in the Delphi method. It incentivizes the participants to revise their previous responses based on their new knowledge on the group's positions and thus facilitates consensus. The participants may also provide reasons for their positions (5, 6). Again, the results are analyzed. The process continues in several rounds (typically 2-5) until a satisfactory degree of consensus among all participants is reached (2-6).

4. Finally, the results of the process are summarized and evaluated for all participants (4).

The literature indicates a variety of benefits that the Delphi method offers.

However, several potential pitfalls and challenges may arise during the Delphi process:

In their 2014 publication, Kauko & Palmroos present their results from a Delphi process with financial experts in Finland. They held a Delphi session with five individuals from the Bank of Finland, and the Financial Supervisory Authority of Finland, each. Every individual was anonymized with a self-chosen pseudonym so that the researchers could track the development of their responses. The participants were asked questions in a questionnaire that revolved around the close future of domestic financial markets. Specifically, the participants were asked to numerically forecast 15 different variables (e.g. stock market turnover, interest in corporate loans, banks' foreign net assets etc.) with simple point estimates. These variables were chosen to "fall within the field of expertise of the respondents, and at the same time be as independent of each other as possible." (p.316). The participants were provided with information on the past developments of each of these variables.

The researchers decided to go with three rounds until consensus should be reached. For the first round, questionnaires were distributed by mail, and the participants had one week to answer them. The second and third round were held on the same day after this one-week period. The responses from the respective previous round were re-distributed to the participants (each individual answer including additional comments, as well as the group average and the median for each variable). The participants were asked to consider this information, and answer all 15 questions - i.e., forecast all 15 variables - again.

After the third round, the participants were additionally asked to fill out survey questions on a 1-5 Likert Scale about how reliable their considered their own forecasts, and how much attention they had paid to the others' forecasts and comments when these were re-distributed, both regarding each variable individually. This was done to better understand each individual's thought process. 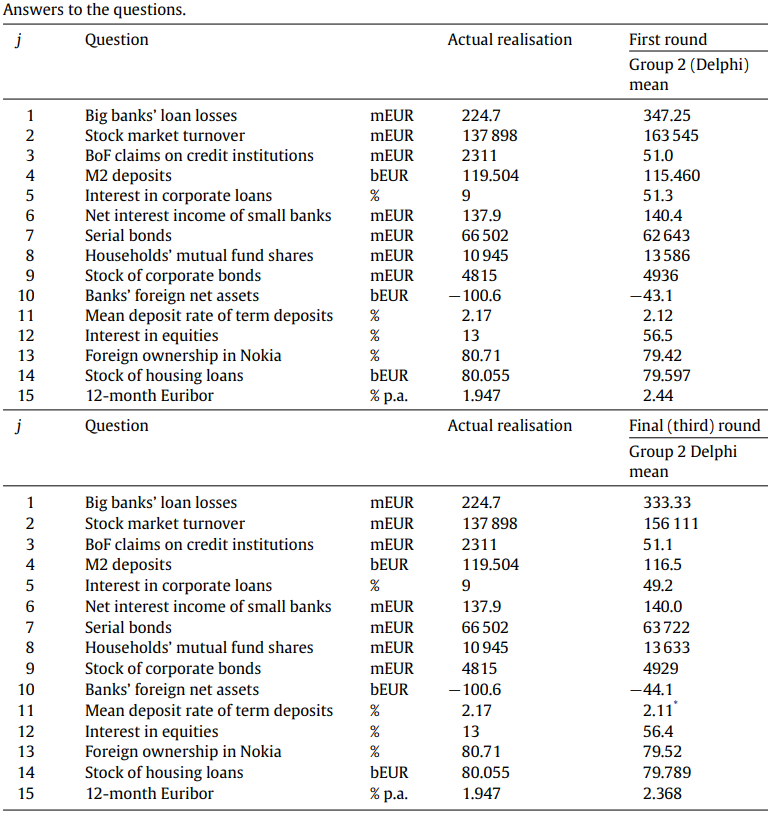 The results for the Delphi process. It shows that the mean estimates of the group became better over time, and were most often quite close to the actual realisation. Source: Kauko & Palmroos 2014, p.326.

The forecasting results from the Delphi process could be verified or falsified with the real developments over the next months and years, so that the researchers were able to check whether the responses actually got better during the Delphi process. They found that the individual responses did indeed converge over the Delphi process, and that the "Delphi group improved between rounds 1 and 3 in 13 of the questions." (p.320). They also found that "[d]isagreeing with the rest of the group increased the probability of adopting a new opinion, which was usually an improvement" (p.322) and that the Delphi process "clearly outperformed simple trend extrapolations based on the assumption that the growth rates observed in the past will continue in the future", which they had calculated prior to the Delphi (p.324). Based on the post-Delphi survey answers, and the results for the 15 variables, the researchers further inferred that "paying attention to each others' answers made the forecasts more accurate" (p.320), and that the participants were well able to assess the accuracy of their own estimates. The researchers calculated many more measures and a comparison to a non-Delphi forecasting round, which you can read more about in the publication. Overall, this example shows that the Delphi method works in that it leads to more accurate results over time, and that the process itself helps individuals better forecast than traditional forecasts would.

An extensive description of the characteristics, history, pitfalls and philosophy behind the Delphi method.

The original document illustrating the first usage of the Delphi method at RAND.

The report that popularized Delphi outside of the military defense field.

Retrieved from "https://sustainabilitymethods.org/index.php?title=Delphi&oldid=6230"
Categories:
This page was last edited on 12 August 2021, at 10:28.
Privacy policy
About Sustainability Methods
Disclaimers