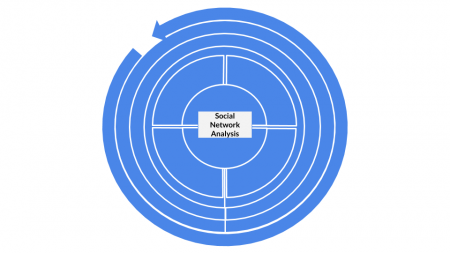 In short: Social Network Analysis visualises social interactions as a network and analyzes the quality and quantity of connections and structures within this network. 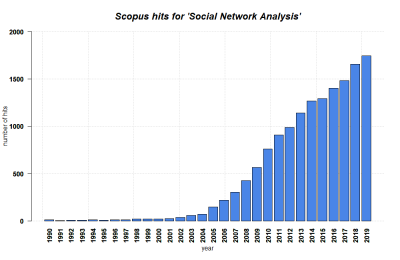 One of the originators of Network Analysis was German philosopher and sociologist Georg Simmel. His work around the year 1900 highlighted the importance of social relations when understanding social systems, rather than focusing on individual units. He argued "against understanding society as a mass of individuals who each react independently to circumstances based on their individual tastes, proclivities, and beliefs and who create new circumstances only by the simple aggregation of their actions. (...) [W]e should focus instead on the emergent consequences of the interaction of individual actions." (Marin & Wellman 2010, p.6) 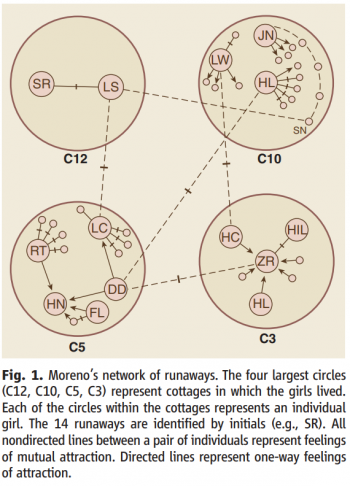 Romanian-American psychosociologist Jacob Moreno heavily influenced the field of Social Network Analysis in the 1930s with his - and his collaborator Helen Jennings' - 'sociometry', which served "(...) as a way of conceptualizing the structures of small groups produced through friendship patterns and informal interaction." (Scott 1988, p.110). Their work was sparked by a case of runaways in the Hudson School for Girls in New York. Their assumption was that the girls ran away because of the position they occupated in their social networks (see Diagram).

Moreno's and Jennings' work was subsequently taken up and furthered as the field of 'group dynamics', which was highly relevant in the US in the 1950s and 1960s. Simultaneously, sociologists and anthropologists further developed the approach in Britain. "The key element in both the American and the British research was a concern for the structural properties of networks of social relations, and the introduction of concepts to describe these properties." (Scott 1988, p.111). In the 1970s, Social Network Analysis gained even more traction through the increasing application in fields such as geography, economics and linguistics. Sociologists engaging with Social Network Analysis remained to come from different fields and topical backgrounds after that. Two major research areas today are community studies and interorganisational relations (Scott 1988; Borgatti et al. 2009). However, since Social Network Analysis allows to assess many kinds of complex interaction between entities, it has also come to use in fields such as ecology to identify and analyze trophic networks, in computer science, as well as in epidemiology (Stattner & Vidot 2011, p.8).

"Social network analysis is neither a theory nor a methodology. Rather, it is a perspective or a paradigm." (Marin & Wellman 2010, p.17) It subsumes a broad variety of methodological approaches; the fundamental ideas will be presented hereinafter.

Social Network Analysis is based on the idea that "(...) social life is created primarily and most importantly by relations and the patterns formed by these relations. Social networks are formally defined as a set of nodes (or network members) that are tied by one or more types of relations." (Marin & Wellman 2010, p.1; Scott 1988). These network members are also commonly referred to as "entitites", "actors", "vertices" or "agents" and are most commonly persons or organizations, but can in theory be anything (Marin & Wellman 2010). The nodes are "(...) tied to one another through socially meaningful relations" (Prell et al. 2009, p.503), which can be "(...) collaborations, friendships, trade ties, web links, citations, resource flows, information flows (...) or any other possible connection" (Marin & Wellman 2010, p.2). It is important to acknowledge that each node can have has different relations to all other nodes, spheres and levels of the network. Borgatti et al. (2009) refer to four types of relations in general: similarities, social relations, interactions, and flows.

The Social Network Analyst then analyzes these relations "(...) for structural patterns that emerge among these actors. Thus, an analyst of social networks looks beyond attributes of individuals to also examine the relations among actors, how actors are positioned within a network, and how relations are structured into overall network patterns." (Prell et al. 2009, p.503). Social Network Analysis is thus not the study of relations between individual pairs of nodes, which are referred to as "dyads", but rather the study of patterns within a network. The broader context of each connection is of relevance, and interactions are not seen independently but as influenced by the adjacent network surrounding the interaction. This is an important underlying assumption of Social Network Theory: the behavior of similar actors is based not primarily on independently shared characteristics between different actors within a network, but rather merely correlates with these attributes. Instead, it is assumed that the actors' behavior emerges from the interaction between them: "Their similar outcomes are caused by the constraints, opportunities, and perceptions created by these similar network positions." (Marin & Wellman 2010, p.3). Surrounding actors may provide leverage or influence that affect the agent's actions (Borgatti et al. 2009) 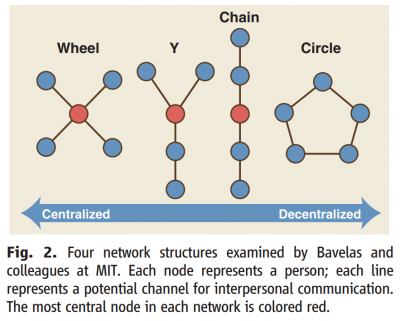 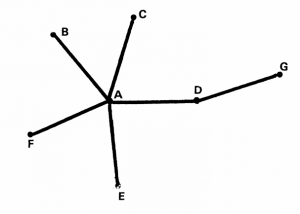 An exemplary network structure. The dyads BE and BF - i.e. the connections between B and E, and B and F, respectively - are equally long in this network although BF appears to be shorter. This is due to the visual representation of the network, where B and F are closer to each other. Additionally, the central role of A becomes clear. Source: Scott 1988, p.114

In their 2021 publication, researchers from Leuphana (Lam et al., see References) investigated the network ties between 32 NGOs driving sustainability initiatives in Southern Transylvania. Based on the leverage points concept, they attempted to identify how these NGOs contribute to systemic change. For this, they focused on the positions of the NGOs in different networks, with each network representing relations that target different system characteristics (parameters, feedbacks, design, intent). As a basis for this, the authors identified types of ties between the NGOs that contribute to each of these four system characteristics.

Based on these conceptual structures, the authors conducted an online survey in which 30 NGOs participated. In this survey, the NGOs were asked about their relations to other NGOs in terms of the kinds of questions shown above relating to the four leverage points. The NGOs were asked to rate the strength of the respective relations to another NGOs over the past five years with either "not at all" (0), low extent (1), moderate extent (2), high extent (3), and "I don't know". Further, the survey asked the NGOs four questions about the four kinds of amplification as shown above.

With the survey data, the authors created four networks using Gephi and NodeXL software, one for each system characteristic. For each NGO (= node), they calculated three measures (Lam et al. 2021, p.816):

They additionally tested for the influence of each NGO's amplification actions on these network measures by comparing those NGOs that applied a specific amplification action to those that did not, using a Mann-Whitney U test (also known as Wilcoxon rank-sum test).

In their results, they "(...) found that while some NGOs had high centrality metrics across all four networks (...), other NGOs had high weighted degree, betweenness, or eigenvector in one particular network." (p.817) 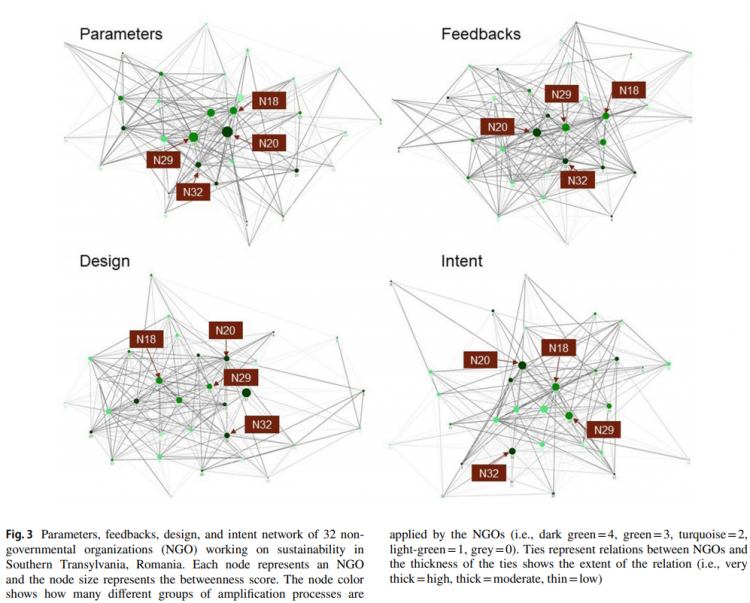 Without going into too many details at this point, we can see that the created networks tell us a lot about different aspects of the relation between actors. Based on the shown and further results, the authors concluded that

For more on this study, please refer to the References.

Retrieved from "https://sustainabilitymethods.org/index.php?title=Social_Network_Analysis&oldid=6307"
Categories:
This page was last edited on 1 September 2021, at 01:41.
Privacy policy
About Sustainability Methods
Disclaimers