In short:Partial Correlation is a method to measure the degree of association between two variables, while controlling for the impact, a third variable has on both. When looking at correlations, they can often be misleading and must be treated with care. For example, this website provides a list of strongly significant correlations that do not seem to have a meaningful and direct connection. This undermines that correlation is not necessarily related to causality. On the one hand, this may be due to the principle of null hypothesis testing (see p-value). But in the case of correlation, strong significances can often be caused by a relationship to a common third variable and are therefore biased.

Fig.1: Stock populations and human birth across Europe. From Matthews (2001). 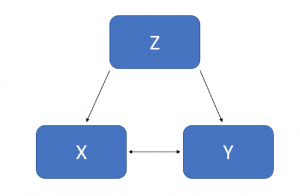 Let's consider this example from Matthews (2001) on stork populations and human birth rates across Europe (Fig.1). A correlation between both variables indicates a statistically significant positive relation of r = .62. But can we really make sense of this correlation? Does it mean that storks deliver babies? It is very likely that the connection can be explained by one (or more) external variable(s), for example by how rural the area of measurement is (see Figure 2). In a more rural area, more children are born and at the same time there is more space for storks to build their nests. So how can we control for this effect in a correlation analysis?

To use partial correlation and gain valid results, some assumptions must be fulfilled. No worries if these assumptions are violated! There is often still a work-around that can be done to bypass them.

That way we can now consider the left-over (unexplained) variance - namely the residuals of the regressions. To better understand, why we are doing this, let s look at an individual data point of the regressions. If this point exceeds the predictions for both regressions equally, then there seems to be a remaining connection between both variables. So, when looking back at the broad picture of every data point, this means that if the residuals of both regressions are unrelated, then the relationship of the two variables could be explained by the third variable. 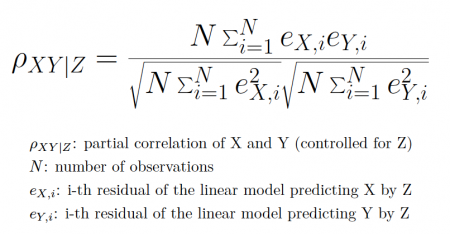 It is also possible to add more than one control variable. We then use another, recursive formula. However, it is not recommended to add more than 2 control variables, because more variables impair the reliability of the test and the complexity of the recursive algorithm increases exponentially. When checking for the “unbiased” effect of multiple variables, it might be better to use a multiple linear regression instead.

Partial Correlation can be performed using R. Let s consider the following (fictitious) data. The capital of the following sample of workers is correlated to the number of annual doctor visits (r ≈ .895).

One way to perform a partial correlation on this data is to manually calculate it.

However, there are also a lot of pre-build packages for calculating a partial correlation. They provide an easier use and are especially more convenient when controlling for more than one variable. One example is the package ppcor.

We can see that the result for doctor visits and capital is identical to our manual approach.

The author of this entry is Daniel Schrader.

Retrieved from "https://sustainabilitymethods.org/index.php?title=Partial_Correlation&oldid=6593"
Categories:
This page was last edited on 21 March 2022, at 04:51.
Privacy policy
About Sustainability Methods
Disclaimers