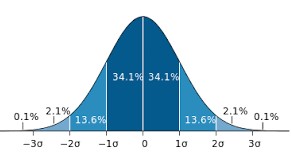 How wonderful, it is truly a miracle how almost everything that can be measured seems to be following the normal distribution. Overall, the normal distribution is not only the most abundantly occurring, but also the earliest distribution that was known. It follows the premise that most data in any given dataset has its majority around a mean value, and only small amounts of the data are found at the extremes.

Most phenomena we can observe follow a normal distribution. The fact that many do not want this to be true is I think associated to the fact that it makes us assume that the world is not complex, which is counterintuitive to many. While I believe that the world can be complex, there are many natural laws that explain many phenomena we investigate. The Gaussian normal distribution is such an example. Most things that can be measured in any sense (length, weight etc.) are normally distributed, meaning that if you measure many different items of the same thing, the data follows a normal distribution.

The easiest example is tallness of people. While there is a gender difference in terms of height, all people that would identify as e.g. females have a certain height. Most have a different height from each other, yet there are almost always many of a mean height, and few very small and few very tall females within a given population. There are of course exceptions, for instance due to selection biases. The members of a professional basketball team would for instance follow a selection bias, as these would need to be ideally tall. Within the normal population, people’s height follow the normal distribution. The same holds true for weight, and many other things that can be measured. 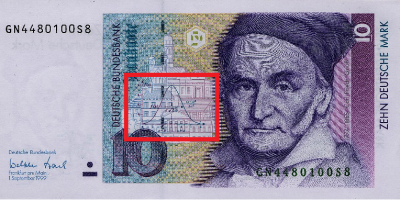 Discovered by Gauss, it is only consecutive that you can find the normal distribution even at a 10DM bill. 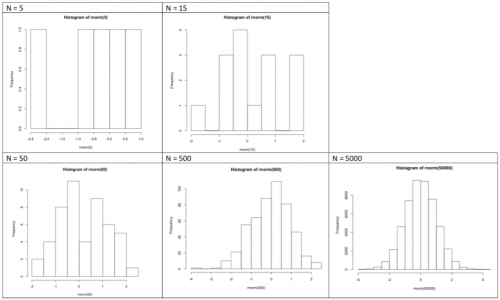 Why some distributions are skewed

Data can be skewed. These graphs show you how distributions can differ according to mode, median and mean of the displayed data. 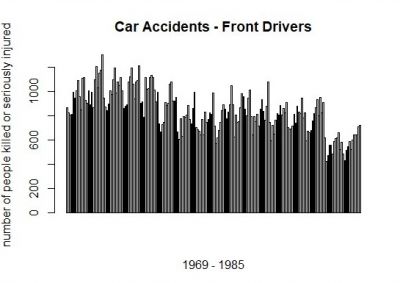 This is a time series visualized through barplots. 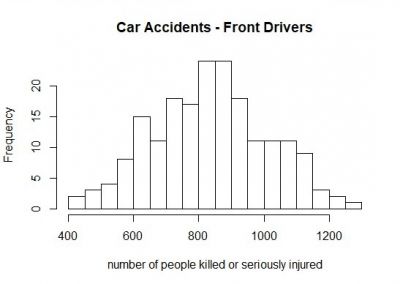 This is the same data as a histogram. 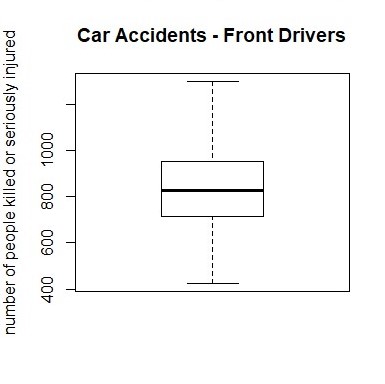 And this the data as a boxplot. You can see that the data is normally distributed because the whiskers and the quarters have nearly the same length.

But when is data normally distributed? And how can you recognize it when you have a boxplot in front of you? Or a histogram? The best way to learn it, is to look at it. Always remember the ideal picture of the bell curve (you can see it above), especially if you look at histograms. If the histogram of your data show a long tail to either side, or has multiple peaks, your data is not normally distributed. The same is the case if your boxplot's whiskers are largely uneven.

This barplot (at the left) represents the number of front-seat passengers that were killed or seriously injured annually from 1969 to 1985 in the UK. And here comes the magic trick: If you sort the annually number of people from the lowest to the highest (and slightly lower the resolution), a normal distribution evolves (histogram at the left).

If you would like to know how one can create the diagrams which you see here, this is the R code: 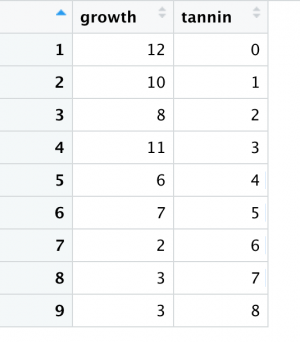 1. Growth of caterpillars in relation to tannin content in food

The command qqplot will return a Quantile-Quantile plot. This plot allows for a visual inspection on how your model residuals behave in relation to a normal distribution. On the y-axis there are the standardised residuals and on the x-axis the theoretical quantiles. The simple answer is, if your data points are on this line you are fine, you have normal errors, and you can stop reading here. If you want to know more about the theory behind this please continue. Residuals is the difference of your response variable and the fitted values.

For a regression analysis this would be the difference of your data points to the regression line. The standardised residuals depend on the model function you are applying.

In the following example, the standardised residuals are the residuals divided by the standard deviation. Let's take the caterpillar data set as an example. On the right you can see the table with the data: growth of caterpillars in relation to tannin content of their diet. Below, we will discuss some correlation plots between these two factors. 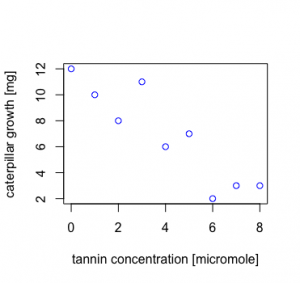 2. Plotting the data in an x-y plot already gives you an idea that growth probably depends on the tannin content. 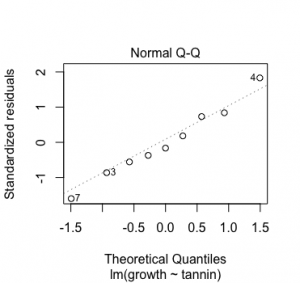 4. The qqplot for this model looks good. Here the points are mostly on the line with point 4 and point 7 being slightly above and below the line. Still you would consider the residuals in this case to behave normally. 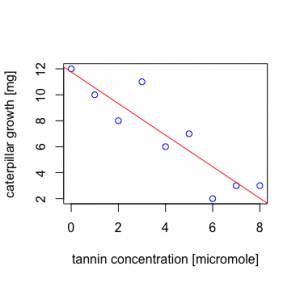 3. Plotted regression line of the regression model lm(growth~tannin) for testing the relation between two factors 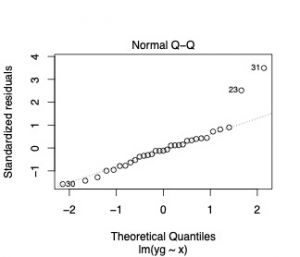 5. A gamma distribution, where the variances increases with the square of the mean. 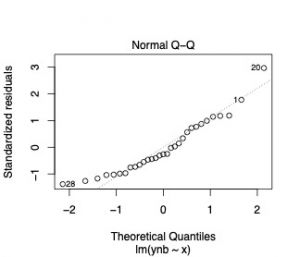 6. A negative binomial distribution that is clearly not following a normal distribution. In other words here the points are not on the line, the visual inspection of this qqplot concludes that your residuals are not normally distributed. 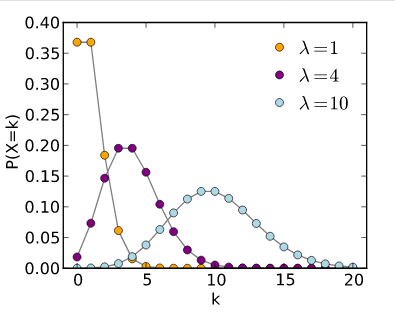 This picture shows you several possible poisson distributions. They differ according to the lambda, the rate parameter.

Things that can be counted are often not normally distributed, but are instead skewed to the right. While this may seem curious, it actually makes a lot of sense. Take an example that coffee-drinkers may like. How many people do you think drink one or two cups of coffee per day? Quite many, I guess. How many drink 3-4 cups? Fewer people, I would say. Now how many drink 10 cups? Only a few, I hope. A similar and maybe more healthy example could be found in sports activities. How many people make 30 minute of sport per day? Quite many, maybe. But how many make 5 hours? Only some very few. In phenomenon that can be counted, such as sports activities in minutes per day, most people will tend to a lower amount of minutes, and few to a high amount of minutes.

Now here comes the funny surprise. Transform the data following a Poisson distribution, and it will typically follow the normal distribution if you use the decadic logarithm (log). Hence skewed data can be often transformed to match the normal distribution. While many people refrain from this, it actually may make sense in such examples as island biogeography. Discovered by MacArtur & Wilson, it is a prominent example of how the log of the numbers of species and the log of island size are closely related. While this is one of the fundamental basic of ecology, a statistician would have preferred the use of the Poisson distribution.

Example for a log transformation of a Poisson distribution 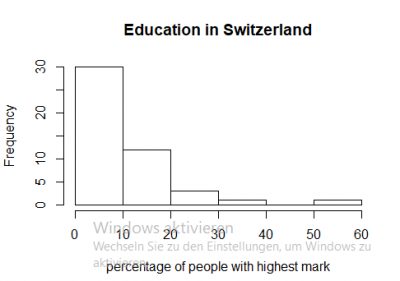 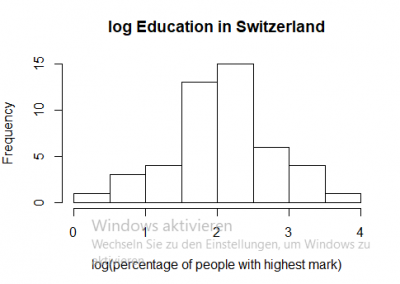 One example for skewed data can be found in the R data set “swiss”, it contains data about socio-economic indicators of about 50 provinces in Switzerland in 1888. The variable we would like to look at is “Education”, which shows how many men in the army (in %) have an education level beyond primary school. As you can see when you look at the first diagram, in 30 provinces only 10 percent of the people received education beyond the primary school.

To obtain a normal distribution (which is useful for many statistical tests), we can use the natural logarithm.

If you would like to know, how to conduct an analysis like on the left-hand side, we uploaded the code right below: 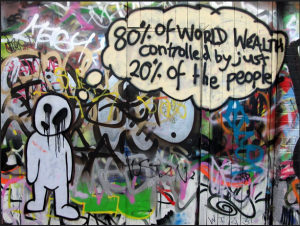 The Pareto distribution can also be apllied when we are looking at how wealth is spread across the world.

Did you know that most people wear 20 % of their clothes 80 % of their time? This observation can be described by the Pareto distribution. For many phenomena that describe proportion within a given population, you often find that few make a lot, and many make few things. Unfortunately this is often the case for workloads, and we shall hope to change this. For such proportions the Pareto distribution is quite relevant. Consequently, it is rooted in income statistics. Many people have a small to average income, and few people have a large income. This makes this distribution so important for economics, and also for sustainability science.

A nice way to visualize a data set is to draw a boxplot. You get a rough overview how the data is distributed and moreover you can say at a glance if it’s normally distributed. The same is true for histograms, but we will focus on the boxplot for now. For more information on both these forms of data visualisation, please refer to the entry on Barplots, Histograms and Boxplots.

What are the components of a boxplot and what do they represent? 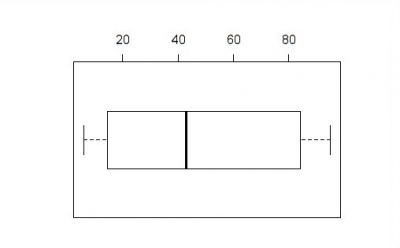 For the lower whisker, the procedure is nearly the same. Again, you use the product of 1,5*IQR, but this time you subtract this value from the lower quartile: Here is your lower whisker: 14 – 109,5 = -95,5

And as there are no values outside of the range of our whiskers, we have no outliers. Furthermore, the whiskers to not extend to their extremes, which we calculated above, but instead mark the most extreme data points.

If you want to learn more about Boxplots, check out the entry on Histograms and Boxplots. Histograms are also very useful when attempting to detect the type of distribution in your data.

For more on data visualisation, check out the Introduction to statistical figures.

Of course, there are more types of data distribution. We found this great overview by Aswath Damodaran, which helps you investigate the type of distribution in your data.

The normal distribution: An explanation

The Poisson distribution: A mathematical explanation

The Boxplot: A quick example

The Normal Distribution: A word on sample size

The weight of nations: How body weight is distributed across the world

The Poisson Distribution: The history

The Pareto Distribution: An explanation

The pareto principle and wealth inequality: An example from the US

History of Probability: An Overview

Frequentist vs. Bayesian Approaches in Statistics: A comparison

Bayesian Statistics: An example from the wizarding world

Probability and the Normal Distribution: A detailed presentation

Compare your income: A tool by the OECD

Retrieved from "https://sustainabilitymethods.org/index.php?title=Data_distribution&oldid=5764"
Categories:
This page was last edited on 13 June 2021, at 08:44.
Privacy policy
About Sustainability Methods
Disclaimers