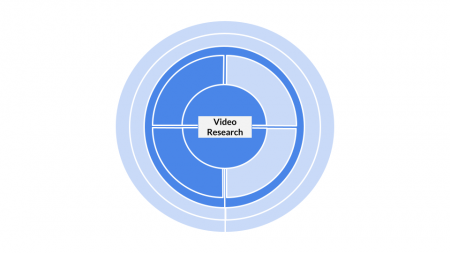 In short: Video Research extracts information based on video material of social interactions. 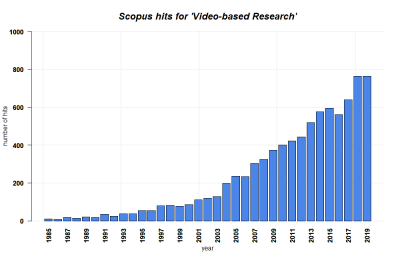 In the beginning of the 20th Century, ethnographers made use of early video technology for so-called 'film studies' that had a focus on "human behavior and conduct, interaction and communication" (Janík et al. 2009, p.7; 1). Yet, video- or audio-taping was also often used merely to help produce more precise transcriptions of speech in qualitative research and to identify and describe the speaking individuals (4).

During the second half of the 20th Century, however, the rising availability and fidelity of video technology led to an increase of its usage and to advancements of the methodology. Being able to videotape events, such as classroom sessions, offered researchers new, rich possibilities of qualitative analysis compared to solely relying on taking notes and conducting interviews (1). At the same time, this deep insight limited in turn the potential sample size in the respective studies (4). So while purely qualitative approaches - focusing on single or small numbers of classes - had become a common form of educational analysis by the 1990s, they did not allow for generalizations that were necessary for changes in educational policies.

As a consequence, quantitative approaches in form of Video Surveys were introduced at the end of the 1980s (1, 4). The most notable research endeavor in this regard was the TIMSS Videotape Classroom Study in the 1990s (see Key Publications). This study relied on 'Video Surveys', which include bigger case numbers and which were made possible through improvements in multimedia computer technology (1, 4). They combine the potential for statistical analysis and thus more generalizable findings while maintaining the validity provided by the video technology. Due to the technological improvements during the last decades, video-based research was subsequently applied more often (1, 3, 6). Today, video-based methodologies are used mainly in educational research, often in the field of cross-national comparisons, but also in psychology and sociology (1, 4).

Video-based research refers to "(...) research of social or educational reality based on analysis of video recordings" (Janík et al. 2009, p.7). Individual events, such as classroom sessions or cultural ceremonies, are recorded on video. The generated video footage then serves as the basis for the analysis of the respective situation. Video-based research is thus a method that includes both data gathering and data analysis (2). The video data is coded in a process similar to Content Analysis: the events happening in the video and the statements made by, for example, teachers and students are coded according to theory-led, pre-determined or inductively and iteratively developed categories (4). Often, additional data is adduced to provide contextual information (see Challenges).

The design of a study in education research, combining video-taping with additional forms of data gathering. Source: (Brückmann & Knierim 2008, p.193)

The scope of the research may range from qualitative, unstructured, small-scale observations to more quantitative, large-scale, structured studies, depending on the research questions and theoretical approach (2). Quantitative approaches allow for the identification of trends and variations, while more qualitative approaches strengthen the understanding of prevalent phenomena (1). The possibility of combining both approaches is special about video-based research and enables researchers to quantitatively validate comprehensive qualitative findings (1, 4).

Some of the beneficial methodological elements also pose challenges.

Retrieved from "https://sustainabilitymethods.org/index.php?title=Video_Research&oldid=4260"
Categories:
This page was last edited on 24 February 2021, at 08:40.
Privacy policy
About Sustainability Methods
Disclaimers