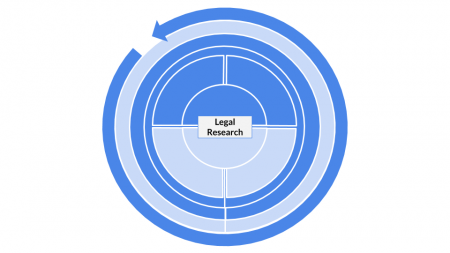 Annotation: Due to the special role of Law as a scientific discipline, this entry will focus more on legal research as a whole as opposed to one specific method.

The field of Law has a long-standing history. "Roman legal doctrine developed since the second century before Christ, and reached a very high level as from the third century after Christ. Its rediscovery and renewed study in Bologna in the eleventh century was the start for the creation of universities." (van Hoecke 2011, p.1). The emergence of Law and its eventual institutionalisation as a scientific discipline was fundamentally based on the reading and interpretation of (Roman) legal documents (2). "During the whole of the Middle-Ages, legal doctrine was highly thought of and considered as a 'scientific discipline', as in those times 'authoritative interpretation', not 'empirical research', was the main criterion for the scientific status of a discipline." (van Hoecke 2011, p.1). The discipline subsequently spread from the first universities in Italy throughout Europe (2). In this time, legal work was mostly restricted to each national context due to the differences in the respective legal systems (2). This early approach to Law as a scientific discipline represents the so-called 'doctrinal approach' which is still the most common understanding of legal work (see What the method does).

However, a second approach developed from the 17th Century on, but mainly from the 19th Century until today. With the rise of positivism - which implies that the only valid knowledge arises from scientific inquiry and falsification of scientific theory -, a new understanding of science emerged. Here, the use of empirical data, the testing of hypotheses and the development of theories, independent from geographical limitations, became the new scientific ideal. In consequence, Law as a scientific discipline changed (van Hoecke 2011, p.1). The research focus in Law partly shifted, both in terms of research questions and methodology: "[i]n the 1960s and 1970s, legal realists and socio-legal scholars started the law and society movement, and pointed to the importance of understanding the gap between 'law in books' and 'law in action', and the operation of law in society. They were interested in examining the legal system in terms of whether legal reform brings about beneficial social effects and protects the interests of the public. Similarly, in the 1980s critical legal studies integrated ideas and methods found in disciplines such as sociology, anthropology and literary theory." (McConville & Chui 2007, p.5). With Law being a discipline between the Sciences and the Humanities, this new movement borrowed heavily from the Social Sciences in terms of methodology. New adjacent disciplines emerged, including legal sociology, legal psychology and law and economics, among others (2, 5). This 'Law in context' - also called 'socio-legal' - approach includes new topics and methodological directions with a stronger focus on empirical research and theory building and has been universally taken up in academic institutions.

From this contextualized approach to Law, research emerged on the relationship between Law and Society and questions of power relations, more specificially on aspects such as gender, social class, ethnicity and religion (5). 'Socio-legal research' may be seen as an alternative or a supplement, but not necessarily as a substitute to traditional legal analysis (2, 5). The openness towards a contextualization of Law acknowledges the fact that Law is influenced by thoughts and discourses from other disciplines such as sociology, economics, political science, history and psychology (4, 7). In addition, "understanding of the modern patent law, environmental law, and information technology law presupposes adequate study of biotechnology, ecology, and information technology." (4, p.18). New approaches to and combinations of methods have emerged and continue to develop. The common 'doctrinal' approach to legal research, i.e. collecting, reading and interpreting (legal) texts, is increasingly scrutinized as the primary methodological approach (2, 3). According to critics, legal publications and teaching in academic institutions do not sufficiently reflect upon the methodological approaches of traditional legal research (2, 5). This critique stems from a comparison to other established disciplines in the (Social) Sciences which have been using a diverse set of defined methodological approaches for decades (2). It has also emerged in view of fundamental changes in academia in the last decades, notably in terms of methodological advancements and trends of internationalisation (2).

Generally, legal research aims at understanding the law and the legal order. The methodological approach can be seen as concentring circles: the smallest circle is about understanding a particular provision, then this provision within the respective legal order (i.e. national legal order, European legal order), then within the specific societal context, then within the world. As explained before, there are different approaches to this: 'Doctrinal' research views Law on a theoretical basis and as a self-sustaining set of principles that are accessible through (legal) texts. This represents the approach by Kelsen (6), according to whom legal research is not about the process behind or content of Law, but rather about its structure, independent from any context. 'Socio-legal' research, by comparison, predominantly revolves around Law as a social phenomenon with its social, economic and political implications which the researcher often attempts to analyze using empirical methods in an interdisciplinary manner (4; 5, see Background). While the majority of academic publications and practical work in Law falls under the first category, the second type has significantly gained traction in academic discourse during the last decades (5c, see Background). Both approaches may be pursued for different purposes: to understand and describe the current system, to explain causes and effects or explore new ideas, to aim for reforms and improvements, to find practical solutions to existent problems and to provide foresight into future scenarios (4).

Traditional legal research is often embedded in a specific case study with a certain problem concerning legal norm, policy, institutions or systems (4). The research aims to bring out the problem's background and functioning, assess the underlying principles' outcome and efficacy and suggest reforms or solutions to legal decision-makers answer the problem (4, 7). The results of the analysis may offer solutions to individual legal conflicts or serve as reference points for future decisions and further the development of legislation (2). This type of 'research' must not be seen in the purely academic sense of 'research', but also represents the classical process in practical Law (e.g. for judges). In this regard, Rubin (1997) distinguishes academic and non-academic legal work in that the former often ends with prescriptions for policy-makers, while the latter focuses predominantly on solving legal conflicts (7).

Independent from the sphere of application, the research process is predominantly text-based, focuses on theoretical discussions of the legal text itself, and takes the societal context of the legal problem only into consideration for the purpose of understanding the object and purpose of the Law (5). Overall, this classical method of legal analysis is comparable to Hermeneutics: Legal scholars read text in detail and argue about diverging interpretations (3). The basic procedure to this end is based on syllogisms: If A is B, and A is C, then B must be C. This is based on Sokrates, and when applied to law (normative syllogism after David Hume), it means that:

Let us take the example of §17 Animal welfare act: "Anyone killing a vertebrate without a reasonable ground shall be punished with up to three years imprisonment or a fine".

Further, the interpretation of the documents is supported argumentatively; the analysed laws are explained by the existence of a higher norm or general principle based on real-world contexts; the texts can be analyzed axiomatically and logically and there are normative elements in understanding the underlying norms of the law as well as normative positions to take during their interpretation (3).

So let us apply these four main steps to our example of "reasonable ground":

As we can see, these four steps do not point to one clear definition of what is a "reasonable ground". So the situation can be analyzed in light of a higher law. This happened in Germany when it was discussed whether male chicks should be allowed to be killed during the production of chickens. The German Federal Constitutional Court stated that the economic purpose of killing male chicks does not (anymore) outweigh the responsibility towards animal life, so it was banned.

As this description of the classical legal research process shows, there is indeed a distinct methodology to classical Law (4). It is based on the adoption of methods from the Humanities (historical, analytical and philosophical methods) and generally from the Social Sciences - as Dobinson and Johns (5b) highlight: the identification and collection of relevant documents in law can be seen as "analogous to a social science literature review" (p.22). Traditional legal research also entails theory- and hypothesis-building. As Van Hoecke (3) states: "Legal scholars collect empirical data (statutes, cases etc.), word hypotheses on their meaning and scope, which they test, using the classic canons of interpretation. In the next stage, they build theories (...) which they test and from which they derive new hypotheses." (p.11). Also, "[t]he level of systematisation and concept building is the level of theory building in legal doctrine." (p.17). However, the prescriptive element of legal scholarship - the suggestion of iterations and guidance for policy-makers - differentiates it from the aforementioned disciplines which mostly engage in descriptive accounts of the world (7).

An interesting notion is the question of how 'empirical' legal research is understood. While several scholars imply the usage of 'empirical' data, they most commonly refer to the legal and non-legal documents that are gathered, compared and analysed for a specific case (see e.g. (3)). Methods of social science field research, such as interviews, are acknowledged, but are admitted to play a minor role in the gathering of data (3). Because of this, Dobinson and Johns (2007) highlight that 'doctrinal' legal research is neither quantitative or qualitative, since it does not apply classical empirical methods. However, they declare that "(...) such research is a process of selecting and weighing materials taking into account hierarchy and authority as well as understanding social context and interpretation" (Dobinson & Johns 2007, p.40). Because of this, they still frame doctrinal legal research as a qualitative method. Thus, from a methodological perspective, it may be categorized as a form of data gathering as well as analysis, as qualitative and as both inductive (when focusing on wording as well as object and purpose of the text) and deductive (when analysing systematics and historical background) with regards to the process of document analysis.

The 'doctrinal' approach to legal research has been critized (see Background). As Van Hoecke (3) puts it: "(...) it is often too descriptive, too autopoietic, without taking the context of the law sufficiently into account; it lacks a clear methodology and the methods of legal doctrine seem to be identical to those of legal practice; it is too parochial, limited to very small scientific communities, because of specialisation and geographical limits; there is not much difference between publications of legal practitioners and of legal scholars." (p.2). The 'socio-legal' approach may be seen as an answer to this critique.

Socio-legal research attempts to broaden the picture of the legal situation and takes into consideration factors and data other than legal and sub-legal documents exclusively. The sociological, historical, economic, geographical and/or cultural context of legislation is acknowledged and data is gathered empirically on these elements in order to better understand the underlying issues. Qualitative and quantitative methods of empirical data collection include observation, questionnaires, content analysis, interviews, surveys, experiments and others (5b, 5c). Qualitative methods can help contextualize the subsequent quantitative analysis of the gathered data. The final selection of methods is dependent on the research questions, aims and contexts (2, 4). Like the 'doctrinal' approach, the research may still happen under the umbrella of a case study, where all methods of inquiry and analysis focus on one particular situation (1). Socio-legal research may serve the same goals as classical legal research (improving legislation, suggesting solutions), but is generally more interested in understanding the impact of the legal system on society.

Everything normative to this method

Retrieved from "https://sustainabilitymethods.org/index.php?title=Legal_Research&oldid=6212"
Categories:
This page was last edited on 10 August 2021, at 02:15.
Privacy policy
About Sustainability Methods
Disclaimers