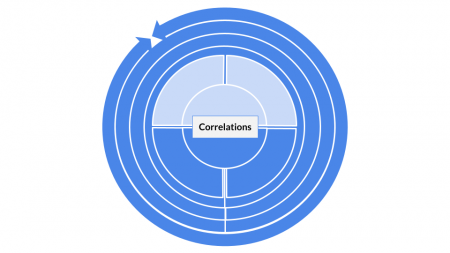 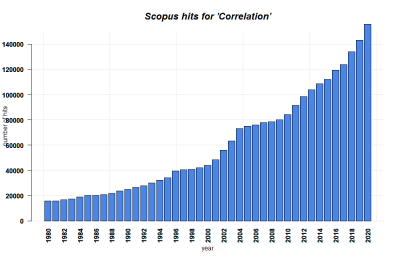 SCOPUS hits per year for Correlations until 2020. Search terms: 'Correlation' in Title, Abstract, Keywords. Source: own.

Karl Pearson is considered to be the founding father of mathematical statistics; hence it is no surprise that one of the central methods in statistics - to test the relationship between two continuous variables - was invented by him at the brink of the 20th century (see Karl Pearson's "Notes on regression and inheritance in the case of two parents" from 1895). His contribution was based on work from Francis Galton and Auguste Bravais. With more data becoming available and the need for an “exact science” as part of the industrialization and the rise of modern science, the Pearson correlation paved the road to modern statistics at the beginning of the 20th century. While other approaches such as the t-test or the Analysis of Variance (ANOVA) by Pearson's arch-enemy Fisher demanded an experimental approach, the correlation simply required data with a continuous measurement level. Hence it appealed to the demand for an analysis that could be conducted based solely on measurements done in engineering, or on counting as in economics, without being preoccupied too deeply with the reasoning on why variables correlated. Pearson recognized the predictive power of his discovery, and the correlation analysis became one of the most abundantly used statistical approaches in diverse disciplines such as economics, ecology, psychology and social sciences. Later came the ​regression analysis, which implies a causal link between two continuous variables. This makes it different from a correlation, where two variables are related, but not necessarily causally linked. This article focuses on correlation analysis and only touches upon regressions. For more, please refer to the entry on Regression Analysis.)

Correlations can be applied to all kinds of quantitative continuous data from all spatial and temporal scales, from diverse methodological origins including Surveys and Census data, ecological measurements, economical measurements, GIS and more. Correlations are also used in both inductive and deductive approaches. This versatility makes correlation analysis one of the most frequently used quantitative methods to date.

The formula to calculate a Pearson correlation coefficient is fairly simple. You just need to keep in mind that you have two variables or samples, called x and y, and their respective means (m). 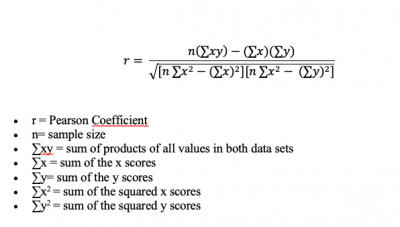 This is the formula for calculating the Pearson correlation coefficient r.

There are some core questions related to the application and reading of correlations. These can be of interest whenever you have the correlation coefficient at hand - for example, in a statistical software - or when you see a correlation plot.

1) Is the relationship between two variables positive or negative? If one variable increases, and the other one increases, too, we have a positive ("+") correlation. This is also true if both variables decrease. For instance, being taller leads to a significant increase in body weight. On the other hand, if one variable increases, and the other decreases, the correlation is negative ("-"): for example, the relationship between 'pizza eaten' and 'pizza left' is negative. The more pizza slices are eaten, the fewer slices are still there. This direction of the relationship tells you a lot about how two variables might be logically connected. The normative value of a positive or negative relation typically has strong implications, especially if both directions are theoretically possible. Therefore it is vital to be able to interpret the direction of a correlative relationship.

On the other hand, you might encounter data of two variables that is scattered all the way in a scatter plot and you cannot find a significant relationship. The correlation coefficient r might be around 0.1, or 0.2. Here, you can assume that there is no strong relationship between these two variables, and that one variable does not explain the other one.

The stronger the correlation coefficient of a relation is, the more may these relations matter, some may argue. If the points are distributed like stars in the sky, then the relationship is probably not significant and interesting. Of course this is not entirely generalisable, but it is definitely true that a neutral relation only tells you, that the relation does not matter. At the same time, even weaker relations may give important initial insights into the data, and if two variables show any kind of relation, it is good to know the strength. By practising to quickly grasp the strength of a correlation, you become really fast in understanding relationships in data. Having this kind of skill is essential for anyone interested in approximating facts through quantitative data.

3) What does the relationship between two variables explain? This is already an advanced skill, and is rather related to regression analysis. So if you have looked at the strength of a correlation, and its direction, you are good to go generally. But sometimes, these measures change in different parts of the data.

To illustrate this, let us have a look at the example of the percentage of people working in Agriculture within individual countries. Across the world, people at a low income (<5000 Dollar/year) have a high variability in terms of agricultural employment: half of the population of the Chad work in agriculture, while in Zimbabwe it is only 10 %. However, at an income above 15000 Dollar/year, there is hardly any variance in the percentage of people that work in agriculture: it is always very low. If you plotted this, you would see that the data points are rather broadly spread in the lower x-values (with x as the income), but are more linearly spread in the higher income areas (= x values). This has reasons, and there are probably one or several variables that explain this variability. Maybe there are other factors that have a stronger influence on the percentage of farmers in lower income groups than for higher incomes, where the income is a good predictor. 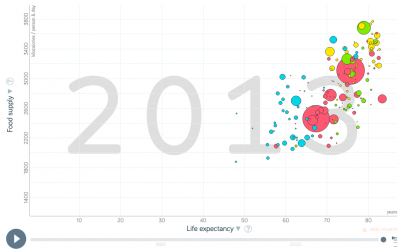 This graph shows the positive correlation between global nutrition and the life expectancy. Source: Gapminder 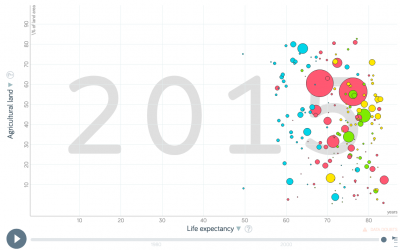 By comparison, life expectancy and agricultural land have no correlation - which obviously makes sense. Source: Gapminder 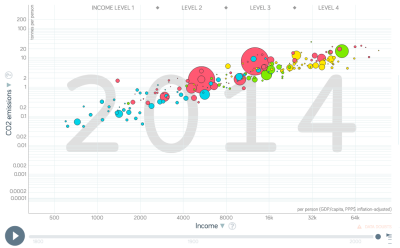 Income does have an impact on how much CO2 a country emits. Source: Gapminder

A quick introduction to regression lines

As you can see, correlation analysis is first and foremost a matter of identifying if and how two variables are related. We do not necessarily assume that we can predict the value of one variable based on the value of the other variable - we only see how they are related. People often show a correlation in a scatter plot - the x-axis is one variable, the y-axis the other one. You can see this in the example below. Then, they put a line on the data. This line - the "regression line" - represents the correlation coefficient. It is the best approximation for all data points. This means that this line has the minimum distance to all data points. If all data points are exactly on the line, we have a correlation of +1 or -1 (depending on the direction of the line). However, the further the data points are from the line, the closer the correlation coefficient is to 0, and the less meaningful the correlation is. 2) Regressions only really make sense if there is some kind of causal explanation for the relationship. We can create a regression line for all correlations of all pairs of two variables, but we might end up suggesting a causal relationship when there really is none. As an example, have a look at the correlation below. There is no regression line here, but the visualisation implies that there is some connection, right? However, it does not really make sense that the divorce rate in Maine and the margarine consumption are related, even though their correlation coefficient is obviously quite high! So you should always question correlations, and ask yourself which kinds of variables are tested for their relationship, and if you can derive meaningful results from doing so. 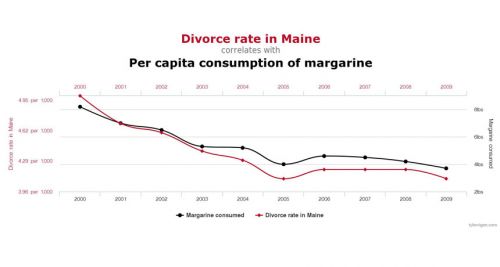 Correlations are among the foundational pillars of frequentist statistics. Nonetheless, with science engaging in more complex designs and analysis, correlations will increasingly become less important. As a robust working horse for initial analysis, however, they will remain a good starting point for many datasets. Time will tell whether other approaches - such as Bayesian statistics and machine learning - will ultimately become more abundant. Correlations may benefit from a clear comparison to results based on Bayesian statistics. Until then, we should all be aware of the possibilities and limits of correlations, and what they can - and cannot - tell us about data and its underlying relationships.

The authors of this entry are Henrik von Wehrden and Christopher Franz.

Retrieved from "https://sustainabilitymethods.org/index.php?title=Correlations&oldid=6371"
Categories:
This page was last edited on 14 September 2021, at 10:39.
Privacy policy
About Sustainability Methods
Disclaimers