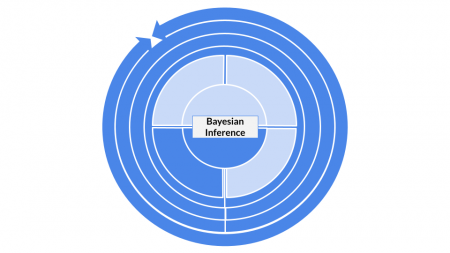 In short: Bayesian Inference is a statistical line of thinking that derives calculations based on distributions derived from the currently available data. 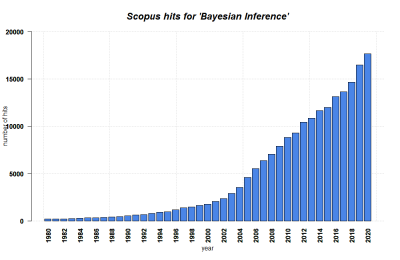 The basic principles behind Bayesian methods can be attributed to the probability theorist and philosopher, Thomas Bayes. His method was published posthumously by Richard Price in 1763. While at the time, the approach did not gain that much attention, it was also rediscovered and extended upon independently by Pierre Simon Laplace (1). Bayes' name only became associated with the method in the 1900s (3).

The family of methods based on the concept of Bayesian analysis has risen the last 50 years alongside the increasing computing power and the availability of computers to more people, enabling the technical precondition for these calculation-intense approaches. Today, Bayesian methods are applied in a various and diverse parts of the scientific landscape, and are included in such diverse approaches as image processing, spam filtration, document classification, signal estimation, simulation, etc. (2, 3)

The probability distribution for prior, evidence, and posterior.

So, how do we update the probability, and hence our belief about the event, as we receive new information? This is achieved using Bayes' Theorem.

Bayes theorem provides a formal mechanism for updating our beliefs about an event based on new data. However, we need to establish some definitions before being able to understand and use Bayes' theorem.

Conditional Probability is a probability based on some background information. If we consider two events A and B, conditional probability can be represented as:

This representation can be read as the probability of event A occurring (or being observed) given that event B occurred (or B was observed). Note that in this representation, the order of A and B matters. Hence P(A|B) and P(B|A) are convey different information (discussed in the coin-toss example below).

Joint Probability, also called "conjoint probability", represents the probability of two events being true - i.e. two events occuring - at the same time. If we assume that the events A and B are independent, this can be represented as:

Interestingly, the conjoint probability can also be represented as follows:

Technically, these are all the things that we need to be able to piece together the formula that you see when you search for "Bayes theorem" online.

We can now replace the two terms on the side with the alternative representation of conjoint probability as shown above. We get:

Note: the marginal probability `p(B)` can also be represented as:

We can see all three definitions that were discussed above appearing in the latter two formulae above. Now, let's see how this formulation of Bayes' Theorem can be applied in a simple coin toss example:

Imagine, you are flipping 2 fair coins. The outcome of one of the coins was a Head. Given that you already got a Head, what is the probability of getting another Head?

(This is same as asking: what is the probability of getting 2 Heads given that you know you have at least one Head)

Solution: If we represent the outcome of Heads by a H and the outcome of Tails by a T, then the possible outcomes of the two coins being tossed simultaneously can be written as: `HH`, `HT`, `TH`, `TT`

The two events A, and B are:

A = the outcome is 2 heads (also called "prior probability")

So, essentially, the problem can be stated as: what is the probability of getting 2 heads, given that we've already gotten 1 head? This is the posterior probability, which can be represented mathematically as:

We saw above that the formula for Bayes' Theorem looks like:

We can represent the formula above in context of this case with the following:

Since this is a toy example, it is easy to come up with all the probabilities we need. However, in real world, we might not be able to pin down the exact probability and likelihood values as easily as we did here.

What we discussed earlier captures one use-case scenario of Bayes' Theorem. However, we already established that Bayes' Theorem allows us to systematically update our beliefs, or hypothesis, about events as we receive new data. This is called the **diachronic interpretation** of Bayes' Theorem.

This formula can be parsed as follows:

Let's go through this formula from the left side to right:

(This example is largely based on the book "Think Bayes" by Allan B. Downey (referenced below))

The Monty Hall problem is based on the famous show called "Let's Make a Deal" where Monty Hall was the host. In one of the games on the show, Monty would present the following problem to the contestant:

There are three doors (Door 1, Door 2, and Door 3). Behind two of those doors are worthless items (a goat), and behind one of the door is something valuable (a car). You don't know what is behind which door, but Monty knows. 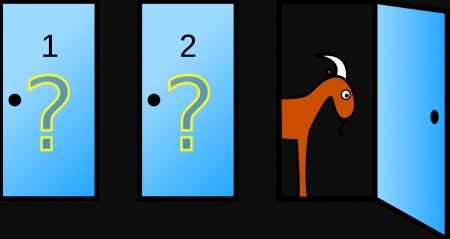 You are asked to choose one of the doors. Then, Monty opens one of the 2 remaining doors. He only ever opens the door with a goat behind it.

Let's say you choose Door 1 - there is no goat behind Door 1, you are lucky. Then Monty will open either Door 2 or Door 3. Whichever door he opens will contain a goat in it. Then you are asked if you want to change your decision and switch to a different door.

The question that has baffled people over the years is: "Do you stick to your choice or do you switch?" While there are many ways to look at this problem, we could view this from a Bayesian perspective, and later verify if this is correct with an experiment.

Step 1: Let's summarize the problem in a more mathematical way:

Data (D): Monty has revealed a door with a goat behind it.

Step 2: Now, let's summarize our knowledge. We use the Bayes' Theorem to solve this problem:

This can be represented as the following:

Initial probability of the Hypothesis being true (prior):

Step 3: Now, we have all the information we need to solve this problem the Bayesian way:

How can we use this to guide our decision? Since the probability that the car is behind a door that we have not chosen `2/3` and Monty has already opened one door with a goat behind it, it would make more sense to switch.

Using Bayes' Theorem, we could reach this conclusion purely analytically.

In addition, we can verify the fact that over time the strategy of switching the doors when asked wins 2/3 of the time: 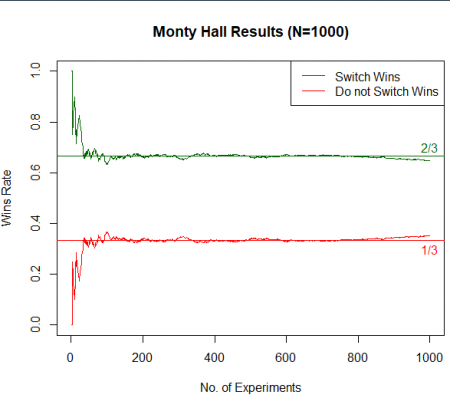 If you want to verify this experimentally, you are encouraged to run the following R script to see the results:

In contrast to a Frequentist approach, the Bayesian approach allows researchers to think about events in experiments as dynamic phenomena whose probability figures can change and that change can be accounted for with new data that one receives continuously. Just like the examples presented above, this has several flipsides of the same coin.

On the one hand, Bayesian Inference can overall be understood as a deeply inductive approach since any given dataset is only seen as a representation of the data it consists of. This has the clear benefit that a model based on a Bayesian approach is way more adaptable to changes in the dataset, even if it is small. In addition, the model can be subsequently updated if the dataset is growing over time. This makes modeling under dynamic and emerging conditions a truly superior approach if pursued through Bayes' theorem. In other words, Bayesian statistics are better able to cope with changing condition in a continuous stream of data.

This does however also represent a flip side of the Bayesian approach. After all, many data sets follow a specific statistical distribution, and this allows us to derive clear reasoning on why these data sets follow these distributions. Statistical distributions are often a key component of deductive reasoning in the analysis and interpretation of statistical results, something that is theoretically possible under Bayes' assumptions, but the scientific community is certainly not very familiar with this line of thinking. This leads to yet another problem of Bayesian statistics: they became a growing hype over the last decades, and many people are enthusiastic to use them, but hardly anyone knows exactly why. Our culture is widely rigged towards a frequentist line of thinking, and this seems to be easier to grasp for many people. In addition, Bayesian approaches are way less implemented software-wise, and also more intense concerning hardware demands.

There is no doubt that Bayesian statistics surpass frequentists statistics in many aspects, yet in the long run, Bayesian statistics may be preferable for some situations and datasets, while frequentists statistics are preferable under other circumstances. Especially for predictive modeling and small data problems, Bayesian approaches should be preferred, as well as for tough cases that defy the standard array of statistical distributions. Let us hope for a future where we surely know how to toss a coin. For more on this, please refer to the entry on Non-equilibrium dynamics.

The authors of this entry are Prabesh Dhakal and Henrik von Wehrden.

Retrieved from "https://sustainabilitymethods.org/index.php?title=Bayesian_Inference&oldid=5817"
Categories:
This page was last edited on 14 June 2021, at 07:28.
Privacy policy
About Sustainability Methods
Disclaimers