In short: Barplots, histograms and boxplots are commonly used in (descriptive) statistics to visualise distribution of numerical data with two variables (typically the response variable on the X axis and the categorical explanatory variable on the Y axis).

A barplot(also known as 'bar chart' or 'column chart') displays quantitative values for different categories. The chart comprises line marks (bars) – not rectangular areas – with the size attribute (length or height) used to represent the quantitative value for each category. 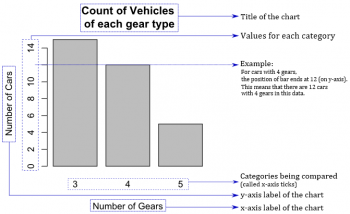 Fig.1:This figure shows the structure of a bar chart.

We will plot a basic bar chart based on a dataset built-in to R called mtcars. The data set contains data on specifications of different cars. One such specification is the number of gears a given car's transmission has. We will first create a summary table that contains the number of cars for a given count of gears. Then, we will use that table to create the plot.

The table that contains information about the frequency of cars for a given number of gears looks like this: 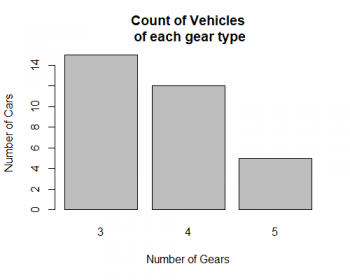 For more on Barplots, please refer to the entry on Stacked Barplots.

A histogram is a graphical display of data using bars (also called buckets or bins) of different height, where each bar groups numbers into ranges. Histograms reveal a lot of useful information about numerical data with a single explanatory variable. Histograms are used for getting a sense about the distribution of data, its median, and skewness. 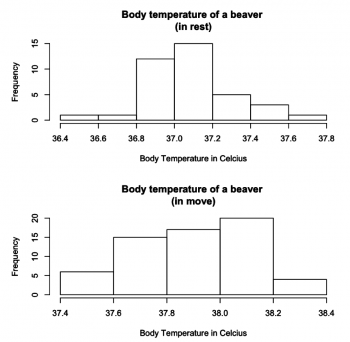 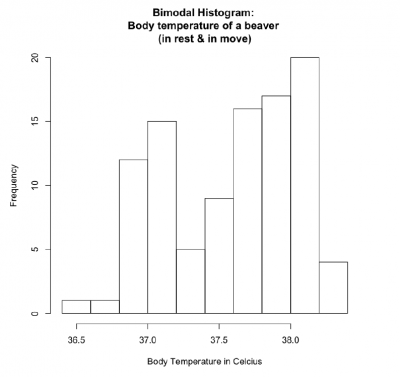 Patterns Histograms display well how data is distributed. For instance, a the symmetric, unimodal pattern of a histogram represents a normal distribution. Likewise, skewed right and left patterns in histograms display skewness of data - asymmetry of the distribution of data around the mean. See “Histogram: Study the Shape” to learn more about histogram patterns.

If the beaver2 dataset plotted into one histogram, it takes bimodal pattern and represents binomial distribution as there are two means of sample points - the temperature of a beaver in rest and in the move.

Number and width of the bars (bins) Histograms can become confusing depending on how the bin margin is put. As it is said in The R Book, p231 - “Wide bins produce one picture, narrow bins produce a different picture, unequal bins produce confusion.” Choice of number and width of bins techniques can heavily influence a histogram’s appearance, and choice of bandwidth can heavily influence the appearance of a kernel density estimate. Therefore, it is suggested that the bins stay in the same width and that the number of the bins is selected carefully to best display pattern in data.

The box plot is a diagram suited for showing the distribution of continuous, univariate data, by visualizing the following six characteristics of a dataset: minimum, first quartile, median, third quartile, maximum and outliers. The compact and space-saving design of box plots allows the comparison of more than one dataset, which is why they have an edge over other diagrams for continuous data, like histograms. A good example for comparative visualisation of both, boxplots and histograms, can be found in the R for Data Science book, chapter 7.51: 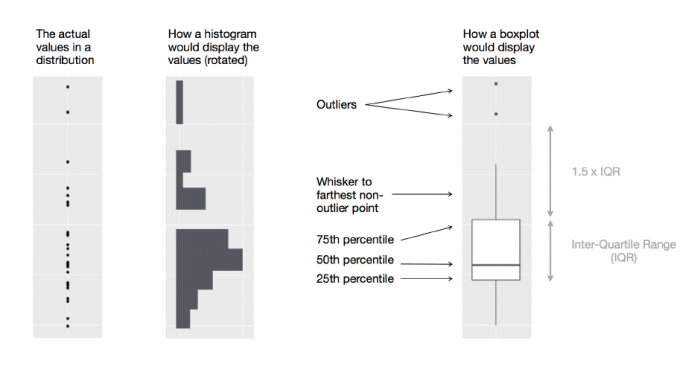 Components of a boxplot

Prerequisite: The values of the dataset should be sorted in ascending order. 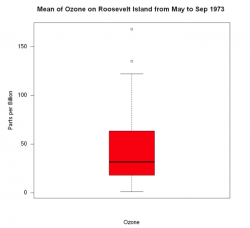 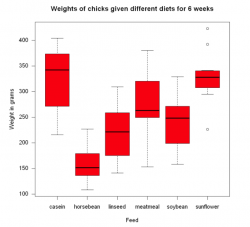 Multiple box plots can be sorted according to their characteristics. The following box plot shows the plot from above, sorted in ascending order by the median. 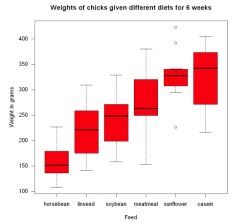 Simple boxplots are not very useful at illustrating if the median values between the groups of sets of data are significantly different. Therefore, we use boxplot with nothces to show the distribution of data points around the median and to see whether or not the median values are different between the groups. The notches are drawn as a ‘waist’ on either side of the median and are intended to give a rough impression of significance of the differences between two medians. Boxes in which the notches do not overlap are likely to prove to have significantly different medians under an appropriate statistical test (The R Book, p213).

The size of the notch increases with the magnitude of the interquartile range and declines with the square root of replication:

where ‘IQR’ is the interquartile range, and ‘n’ is the replication per sample. Notches are based on assumptions of asymptotic normality of the median and roughly equal sample sizes for two medians being compared and are said to be rather insensitive to the underlying distribution of the samples. The idea is to give roughly a 95% confidence interval for the difference if two medians. (The R Book, p213) 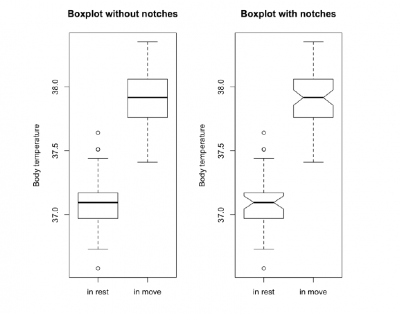 Here are the beaver2 data that was used earlier for plotting histograms:

Because the boxes do not overlap, it can be assumed that the difference in the median of the two data samples will be highly significant. However, the same cannot be said for the dataset plotted in the boxplots below. 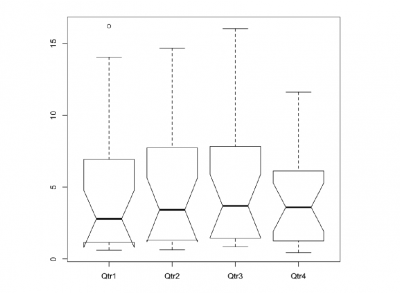 The odd-looking boxplots The JohnsonJohnson boxplot also illustrates the notches’ curious behaviour in the boxes of the Qtr1 and Qtr2. The notches extended above 75th percentile and/or below the 25th percentile when the sample sizes are small and/or the within-sample variance is high. The notches act this way to warn of the likely invalidity of the test (The R Book, p214).

If a dataset is symmetric, the median is approximately in the middle of the box.

The number of outliers and their distance from the rest of the data can be easily read from the diagram.

In case of a normal distribution, the significance of the difference between the data of two box plots can be roughly estimated: If the box of one box plot is higher or lower than the median of another box plot, the difference is likely to be significant. Further investigation is recommended.

We can conclude that both histogram and boxplots are a great tool in displaying how our values are distributed. As stated in Introduction to statistical figures, boxplots compared to histogram show the variance of continuous data across different factor levels and are a solid graphical representation of the Analysis of Variance. One could see box plots less informative than a histogram or kernel density estimate but they take up less space and are better at comparing distributions between several groups or sets of data.

If you do not have installed R or if you cannot run in on your computer, you can run R Code online with Snippets and folow the examples in below resources.

The authors of this entry is Ilkin Bakhtiarov and Henrik von Wehrden.

Retrieved from "https://sustainabilitymethods.org/index.php?title=Barplots,_Histograms_and_Boxplots&oldid=5369"
Categories:
This page was last edited on 21 May 2021, at 05:47.
Privacy policy
About Sustainability Methods
Disclaimers