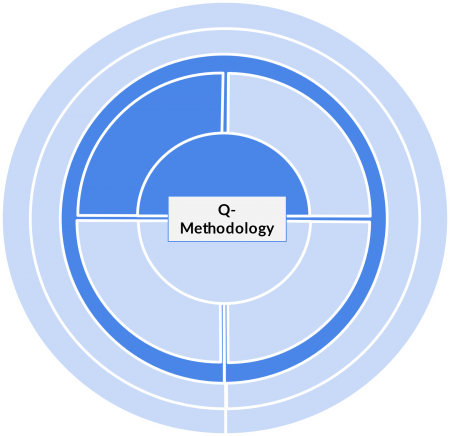 In short: The Q methodology is a qualitative, inductive and exploratory method to identify groups of people concerning their preferences or dissimilarities about specific information.

The Q methodology was developed in 1935 at the University of London by William Stephenson in an attempt to challenge the logic of “testing” that was and is predominant in psychology. However, in Stephenson`s opinion, psychology had not yet reached a “sophisticated theoretical status” (such as e.g. physics had) which would have enabled a deductive mode of theory-testing. Therefore, he proclaimed a more inductive approach to derive new discoveries before moving on to testing theories (Watts and Stenner 2005). Therefore, he developed the Q methodology as a qualitative and inductive method to identify groups of people who share the same points of view on a certain topic (Stephenson 1935; Watts & Stenner 2005). In the beginning, Q methodology was only used in psychology, but recently it is used in various research communities, e.g. nutrition research (see Dennis & Goldberg 1996), biodiversity management (see Hamadou et al. 2016) as well as research on the perceptions of ecosystem services (see Baral et al. 2017; Milcu et al. 2014).

The Q methodology is applied to identify different perspectives on a topic that occur in a population. This is done by identifying groups of people who sort a pool of items in a comparable way (Watts and Stenner 2005). However, this method does not allow generalised statements about the whole population the participants are from. Instead, Q methodology only allows us to identify the main perspectives or perceptions that can be found in this population. The process of the Q methodology follows the standard process of research. First, the data is gathered by letting participants sort a number of items called “Q items” (e.g. cards with statements or pictures) according to their preference from high to low. Second, data is analysed by correlating the resulting configurations, called “Q sorts”, with each other and performing a factor analysis. Third, the results of the factor analysis are interpreted. In detail, the procedure works as follows:

1. Generation of the Q set

The Q set is compiled of the Q items that the participants have to sort. The Q items can be statements that the participants agree or disagree with to a certain extent or pictures that they like more or less. The Q items can be everything that can be brought into an order of preference. In early studies, Q methodology was even conducted with bottled fragrances (Stephenson 1936). The Q set is generated based on the research question. This means that the research question needs to be clear before generating the Q set. The research question should be straightforward and easily understandable for the participants. The Q set is supposed to enable the participants to answer the research question. Therefore, the Q items need to be as heterogeneous as possible to cover a broadly representative range of perspectives. An ideal Q set comprises between 40 and 80 items (Stainton Rogers 1995). The Q items need to be selected very carefully to find items that do not overlap, but at the same time no perspective should be missing. Therefore, the selection process takes the most time and effort of all the steps of the Q methodology. It is suggested to first create an overly large set of Q items and then reduce this number by doing pilot tests.

As a rule of thumb, t 40 to 60 participants in a Q methodological study are proposed to be an appropriate sample size (Stainton Rogers 1995). However, Q studies can also be carried out with fewer participants. Being a qualitative method, the number of participants is less important than the constitution of the participant group. To get a wide range of perspectives, it might make sense to strategically sample participants from different backgrounds. For instance, it makes sense to include experts who might have a pivotal opinion on a topic. The optimal relation between Q items and participants is described as 2:1 for classic Q studies (Watts & Stenner 2012, cited after Burkhardt 2017). 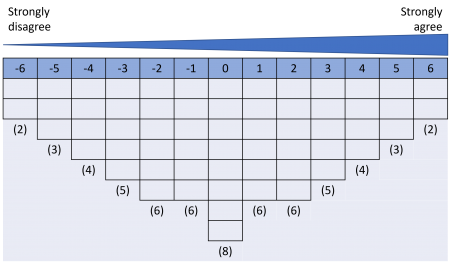 Apart from this “fixed” or “forced” distribution also completely “free” distributions are possible. In this case, the participants can assign any number of items to any of the ranking positions. Statistical comparisons have shown that the kind of distribution does not make a noticeable contribution to the results. However, the forced distribution is less work for the scientist and is more convenient for the participants (Watts & Stenner 2005).

Usually, the sorting is conducted by only one participant at a time under the supervision of the researcher. In the beginning, the researcher is giving the instructions on how to sort the Q items according to the participant’s preferences. It is important to state that there is no wrong or right kind of ranking, but the ranking is just based on personal preference. Since the time people have for sorting influences the outcome, the researcher should decide in advance if the participants should sort spontaneously or if they should have more time to think about the ranking. To influence the outcome as little as possible or at least to minimize the variance, the researcher should not give any input after explaining the way the ranking should be done, except for when urgent questions of understanding arise regarding the Q items. In the end, the Q sort is documented, e.g., by taking a photograph.

If the Q sorting was done by manually sorting the items, the Q sorts of each participant have to be manually typed into an analysis program. For analysis, the freely available text-based statistics software R is proposed. The program R and the package “qmethod” (Zabala et al. 2021) implement diverse approaches of the method and can both be used for fixed and free distributions. The data can be imported as an Excel sheet. Additionally, with PCQ for Windows (commercial) and PQ Method (free), clickable software is available, too. Q-sample data are analysed through principal component analysis (PCA). Therefore, the Q sorts are intercorrelated and factor analysed. The Varimax rotation is often suggested for this purpose (Milcu 2014; Watts & Stenner 2005). For the factor analyses, the PCA function of the FactoMineR package in R is suggested. This analysis allows us to identify factors with eigenvalues above 1. This has the purpose to exclude factors that serve no data-reductive purpose. These are the factors that explain less of the variance than would any single Q sort (Watts & Stenner 2005). An interpretable factor must have at least two Q sorts that load significantly onto this factor alone. This means that at least two participants who share this factor must have produced very similar Q sorts. These participants make sense of the Q items in a similar way.

For interpretation of the Q sorts, possible solutions are chosen based on statistical as well as content-related aspects. Q sorts are selected that are characteristic of a factor and significantly load onto this factor alone. These are called “factor exemplars”. They exemplify the configuration of Q items that is characteristic for this factor (Watts & Stenner 2005). The factors exemplars are interpreted by using the information of the post-sort interview. By doing so, the researcher can figure out if interviewees whose Q sorts significantly load onto the same factor also share other properties such as age, occupation or interests.

Q methodology is often criticised since the outcome depends on the way the research question is stated and on the way the Q items are chosen and/ or formulated. Consequently, the researcher needs to pay a lot of attention towards these two aspects to get meaningful results (Watts and Stenner 2005). This can be done by doing pre-tests. Moreover, the interpretation of the results is rather subjective (Eden et al. 2005). Therefore, the validity and reproducibility of the Q methodology is often under debate. However, William Stephenson assures that the results of the repetitions of a Q method might not be identical, but still reveal relatively similar patterns (Stephenson 1972). Consequently the main conclusion of the repetitions of a Q methodology should be the same. Due to the qualitative nature of the Q methodology, it can only be used to identify points of view in a population, but not by how many people these points of view are shared. Therefore, it can only be used for exploratory purposes but not for hypothesis testing. Another challenge regarding this method is that it does not include temporal dynamics, but portrays a temporally frozen image of viewpoints (Watts and Stenner 2005). Therefore, it is crucial to interpret the results of Q methodology in relation to the point in time when the data was collected. For instance, in the case of environmental questions and ecosystem services, it is known that perceptions of a population change with the seasons (Greenland-Smith & Sherren 2016; van Berkel & Verburg 2014). An ecosystem service such as outdoor recreation might be more important to people in summer than in winter. The strength of the Q methodology lies in explorative studies in cases where there is not yet much data on a certain topic. In these cases, it creates a good overview of different perspectives. Moreover, it provides a large number of application opportunities as it can be used for various items such as statements, pictures and all kinds of objects. For the participants, it is more intuitive and fun to conduct a Q method-based interview than just answering questions or filling out a questionnaire. Since the implementation of the method is relatively straightforward compared to other methods, it is applicable to collect perceptions of all kinds of different stakeholders.

Q methodology is able to combine qualitative and quantitative aspects of knowledge, as it combines a statistical design with intuitive sorting of items such as pictures and statements. Therefore, this method has great potential for collecting data on stakeholders' perceptions on topics concerning the world's most disputed problems. However, the results are not representative for bigger populations as they are strongly dependent on the perspectives of the relatively few participants and their respective context. If the selection of participants is thus not representative, important perspectives could be unintentionally excluded and, as a result, overlooked (Danielson et al. 2009). The reason for the low number of participants is that in traditional Q studies, there used to be the rule that the number of participants should only be half the number of Q items. Otherwise, the authors feared to lose the qualitative aspects of this method (Watts & Stenner 2005). In the future, the Q methodology might benefit from loosening this strict rule and allowing more participants to be included in the study. This would also allow more perspectives to be added and would therefore solve one of the main issues of this method. Additionally, more insightful statistical analyses would be possible with a larger number of participants, allowing not only a greater understanding of variance, but also a linkage of the outcome of the method with contextual data about the participants. That a development of this method is possible and can be successful, is illustrated by the factor analysis which in traditional Q studies used the centroid method. This method provides a theoretically infinite number of rotated solutions. In the long run, this method proved to be too elaborate as the Q analyst has to consider a lot of different rotated solutions before they choose the most informative one. Instead, nowadays the PCA method is often used for factor analysis. This works much faster as the PCA automatically chooses the mathematically superior solution. The results of the PCA are described as “equally satisfying” as the results of the centroid method (Watts & Stenner 2005).

In the future, Q methodology should be improved even further and adapted to the purposes it is nowadays used for. Since it is already used in interdisciplinary research, it makes sense to step away from the strict rules that it was associated with when it originated from qualitative psychology, where these rules were more of a conflict point instead of a solution

The author of this entry is Anna-Lena Rau.

Retrieved from "https://sustainabilitymethods.org/index.php?title=Q-Methodology&oldid=6741"
Categories:
This page was last edited on 28 July 2022, at 10:13.
Privacy policy
About Sustainability Methods
Disclaimers