Mathematics of the t-Test

The t-distribution is symmetric and approximates the normal distribution for large sample sizes.

To compare the mean of a distribution with another distributions mean or an arbitrary value μ, a t-test can be used. Depending on the kind of t-test to be conducted, a different t-statistic has to be used. The t-statistic is a random variable which is distributed according to the t-distribution, from which rejection intervals can be constructed, to be used for hypothesis testing. 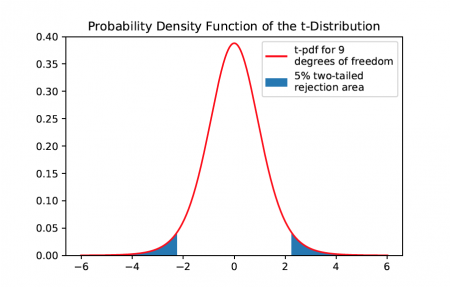 Fig.1: The probability density function of the t-distribution for 9 degrees of freedom. In blue, the 5%, two-tailed rejection region is marked.

When trying to determine whether the mean of a sample of n data points with values xi deviates significantly from a specified value μ, a one-sample t-test can be used. For a sample drawn from a standard normal distribution with mean μ, the t-statistic t can be constructed as a random variable in the following way:

The numerator of this fraction is given as the difference between  x, the measured mean of the sample, and the theorized mean value μ.

The t statistic is distributed according to a students t distribution. This can be used to construct confidence intervals for one or two-tailed hypothesis tests.

For independent samples with similar variances (a maximum ratio of 2), the t-statistic is calculated in the following way:

with the estimated pooled standard deviation

In accordance with the One-sample t-test, the sample sizes, means and standard deviations of the samples 1 and 2 are denoted by n1/2,  x1/2 and σx1/2 respectively. The degrees of freedom which are required for conducting the hypothesis testing is given as ν = n1 + n2 − 2. For samples with unequal variances, meaning that one sample variance is more than twice as big as the other, Welch’s t-test has to be used, leading to a different t-statistic t and different degrees of freedom ν:

An approximation for the degrees of freedom can be calculated using the Welch-Satterthwaite equation:

It can be easily shown, that the t-statistic simplifies for equal sample sizes:

When testing whether the means of two paired samples are differing significantly, the t-statistic consists of variables that differ from the ones used in previous tests:

The authors of this entry is Moritz Wohlstein.

Retrieved from "https://sustainabilitymethods.org/index.php?title=Mathematics_of_the_t-Test&oldid=6612"
Categories:
This page was last edited on 24 March 2022, at 12:01.
Privacy policy
About Sustainability Methods
Disclaimers