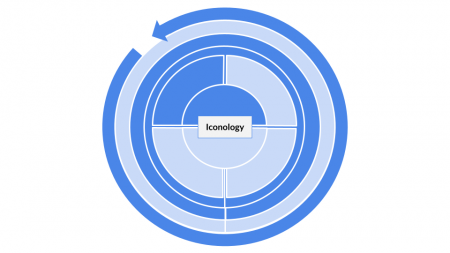 In short: Iconology is a research method that is traditionally used to detect an overall worldview of a past decade or location by interpreting a painting of that time or area.

From Greek “Icon” = picture, “Logos” = word, thinking, speech, reason (4, 3) Iconology is a research method originating in the field of art history and was founded by the German art historian Erwin Panofsky in cooperation with Aby Warburg in the 1930s (6, 3). To this day it is one of the groundworks for all visual analysis done in art, media, theatre, and performance analysis (4, 8). Contemporarily, it is also used as an analysis method in research fields like architecture, literary studies and even politics (4, 8). This entry focuses on the basics of the traditional Iconology. However, <artwork> and <artist> can also be replaced by any other object and practitioner and can be especially effective in experimental, inter-, and transdisciplinary research.

Generally, Iconology works as a three-step model through which different questions are formulated and the according insights are put together subsequently in a complex manner (10). The three steps are: the pre-iconographic step, the step of interpretation (or iconography) and the iconological synthesis (10). Panofsky advised to not consider the steps as absolutely separated, because the verbal articulation of the artwork can only really be usefully read in its complete meaning after the analysis and interpretation (7).

The pre-iconographic step involves the analysis of all formal aspects of the artwork (1a) and the articulation of the emotional reception of the work (1b) (10). Usually, the formal aspects are described upfront (1, 10). However, sometimes the emotional reception is formulated first and positioned ahead of the rest of the analysis as a “percept” (zu Deutsch: “Perzept”), because it involves the researcher’s subjectivity and is therefore a non-scientific insight which some writers and readers like to separate from the scientific text. Nonetheless, the percept is an important part of the iconological analysis and should not be completely excluded, because it can situate the analysis historically and culturally and lead to fruitful insights for the analysis itself and for foreign or future audiences.

1a - The formal analysis This step should include naming the artist and the date and place of production as well as the ownership or place of exhibition, identifying the type of artwork (i.e. painting, sculpture, performance etc.), the scale of the artwork, all materials used, genre and epoch, the form of composition, the colour composition (saturation, light and shadow, forms of contrasts, colour schemes) and all depictions which refers to the recognizability of all things depicted, i.e. the scale of abstraction, the structure, and the arrangement/positioning of things portrayed (fore, mid and background, size of things, left or right) (1, 10).

Disclaimer: In general, if something is unknown or unrecognizable, always make sure to state that after referring to what is known and seen about a category.

1b - The emotional reception/the percept This is traditionally structured in a way that leads from the overall perception to that of single objects or colours within the artwork. Usually, the atmosphere is perceived through emotionality and therefore described during the percept. It can however also be part of the formal analysis if the atmosphere is very obvious and therefore rather part of the common sense than a personal perception. It is important to not only state why a feeling about the artwork occurs but to make assumptions about why this feeling occurs. Contemporary iconological analysis also often refers to assumptions made about how one’s own culture and generation might react to the object. It is very important to state that any universalizing claim is clearly formulated as an assumption or probability (10).

This step involves the consideration of the cultural-historic environment of the artist, the theme and style (10). Primary as well as secondary literature is used for research here (21). It is noteworthy that some artworks, specifically European landscape, still-life, and genre paintings as well as non-representational art do not require this step (6). For those who do however, a first interpretative conclusion is derived only based on the cultural-historic and biographic background of the artist. The artwork can be discussed as a whole and as specific to a genre or epoch or opposingly as unusual. Discussing detailed aspects of the formal analysis is specifically effective when discussing icons and symbolic contents that are clearly relatable to the time of production. However, as with the percept, it is important to consider that sometimes icons, symbols and colour choices were meant to portray the opposite of the traditional understanding of the displayed. Some artists consciously chose to ironically engage with their culture’s, genre’s, and epoch’s traditions.

The final step of the iconological analysis is to connect the insights from the pre-iconographic analysis and interpretation to unravel the deeper meaning of the artwork and the artist's probable intention. The percept can be helpful in this step to clarify findings and to approve that the artist's intentions were put to work effectively. Motifs and single items are put into relation with one another to understand the narrative of the artwork. Colours and shapes are now not only set within an historical background, but also comprehended as an entire tone of expression, representing specific moods or feelings. Similar to the overall atmosphere, single settings within an artwork are put into relation. Finally, all those smaller settings are being interconnected or juxtaposed with each other and with the historical and biographical background of the artist to conclude the probable intended meaning of the artwork and moreover the worldview of the time (10, 1, 6, 8). The following scheme (see Fig. 1) is the original overview of Panofsky’s iconological analysis:

The steps of interpretation by Erwin Panofsky in "Iconology and Iconography". Source.]

Contemporary Iconology, compared to traditional Iconology, also includes other fields in which Iconology has become an effective method of analysing present and past events. Political iconography for example is capable of analysing artistic and medial staging of governments and ruling classes (4). Such visual representations can lead to new findings about political history or reverse national ideas about their own history which reveal possible ‘false histories’ by the means of Iconology (4). Spatial Iconology or architectural Iconology engage with the organization of rooms, their interior structure, its historic symbolical meaning, and how it influenced perception and usage of space by certain groups of society. These forms were an adaption by Günter Bandman of Panofsky’s traditional iconography which focused on paintings (4, 8). Also, archaeology is a prominent field in which Panofsky’s Iconology is in constant use to determine pottery, paintings, and sculptures (162).

Panofsky’s iconographic method is a great way to gain an overview about visual materials. The last step is especially fruitful on gaining insights on the side of the production, may it be the environment of production or the producer/artist as such. Iconology is ideal to research a certain worldview expressed through visual materials. However, it is very important to also accept the possibility of a painting to express the opposite of what information the iconographic step has provided. If done with caution and attention, the pre-iconographic step and the iconological synthesis will draw attention to such discordancies.

The iconographic turn is an attempt of some postmodern thinkers to redefine the way in which images are understood (2). Other than Panofsky’s approach, which focused on reading the worldview transmitted by pictures (9), Brock wanted to add the term “Bilderwelten” (Brock in Burda, p.118) (‘pictorial worlds’) which means to additionally uncover and interpret any internally ordered unities within a picture (cf. Brock in Burda, p.118). From then on, Panofsky’s iconological model has been decreasingly developed itself but has since become more specialized by new aspects being added rather than changed (3).

Additionally, there is the issue that Iconology often leads to different and even opposing findings than other art research methods of which Iconology is always the more traditional approach (3). One prominent attempt to widen Panofsky’s method was William Mitchells “aim […] to further generalize the interpretive ambitions of Iconology by asking it to consider the idea of the image as such” (5). He thus asked two key questions: "What is an image?" and "What is the difference between images and word?” (1). He continues by defining an image generally as a thing that represents objects in the world with a certain “likeness”, “resemblances”, or “similitude” (10). Topper argues however, that this is still not enough and adds that “maps, diagrams and décor” do not always meet any of Mitchell’s criteria, yet need to be included in the definition of what an image is (9). Nevertheless, none of the two specify how Iconology should adapt to make an interpretative analysis of the more generalized term ‘image’ possible.

It is very probable that the rise of inter-, multi-, and transdisciplinary studies and the ongoing postmodern criticism on the sole acceptance of the scientific method of the natural sciences will contribute to the progress of widening and complementing traditional Iconology and hence make a greater implementation of the method possible.

The author of this entry is Mona Hübner.

Retrieved from "https://sustainabilitymethods.org/index.php?title=Iconology&oldid=5946"
Categories:
This page was last edited on 30 June 2021, at 14:04.
Privacy policy
About Sustainability Methods
Disclaimers