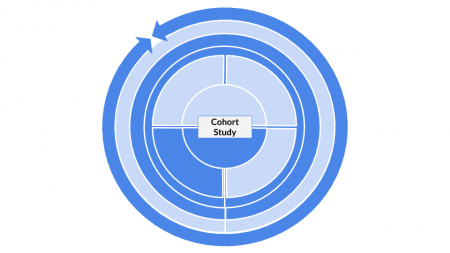 In short: A Cohort Study is a form of quantitative data analysis where two or more groups are tracked over time from a specific exposure to an outcome. 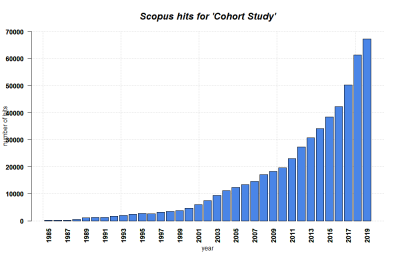 The term 'cohort' historically refers to a 300-600 man unit in the Roman army (3). It found its way into scientific research thanks to Wade Hampton Frost, a medical doctor from the US, who invented the Cohort study method after his pioneering work in the field of epidemiology in the early 20th Century. In a study that was published after his death in 1938, he focused on the mortality rates of tuberculosis patients in Massachusetts and - presumably for the first time - assessed not only differences between age groups in any given year, but also in the development of each cohort over time.

The method and the term 'cohort' were subsequently adapted by the social sciences, mostly focusing on the role of "generations" in historical developments as well as in demography (4). Social sciences and epidemiology remain the most important applications fields of Cohort Studies to this day (2). However, cohorts are no more only defined based on their birth year, but determined based on any shared characteristic of interest (e.g. the experience of a specific event) within a defined time interval (4). It is worthwhile noting that the original term 'cohort analysis' today relates to a big data approach used for business analytics. The scientific method used in statistics and epidemiology today is referred to as 'cohort study' (2). More appropriate synonyms of the cohort study include incidence, longitudinal, forward-looking, follow-up, concurrent or prospective studies (3). 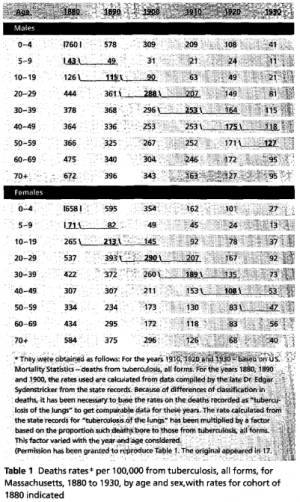 This table from Frost's original paper (see Key Publications) illustrates the mortality of tuberculosis patients (a both infectious and chronic disease), with the year of death in the columns and the age-group of the patients in the lines. When analyzed per year, this table suggests the highest mortality among infants, followed by a peak in the 20-29 year group and another increase for the elderly. However, the death rates for one cohort - seen diagonally over time - only indicates a high mortality for infants and 20-29 year olds, while the mortality rate decreases after that. By analyzing the temporal development of the cohort, Frost was able to reject the previous assumption that especially elderly people are at risk. Instead, he concluded that the high death rates in this age group are residuals from even higher death rates of this cohort in earlier years (1).

The original paper from Frost, published posthumously, that popularized the method.

A summary of the National Child Development Study, a British cohort study covering 17000 children born in a single week in 1958, that pursued these children's lives for several decades and investigated several health and social issues based on these datasets.

Retrieved from "https://sustainabilitymethods.org/index.php?title=Cohort_Study&oldid=4207"
Categories:
This page was last edited on 15 February 2021, at 05:00.
Privacy policy
About Sustainability Methods
Disclaimers