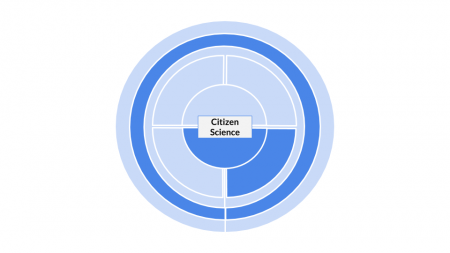 In short: Citizen Science is the conduct of research by members of the general public, usually in collaboration with, or under the direction of, professional researchers. 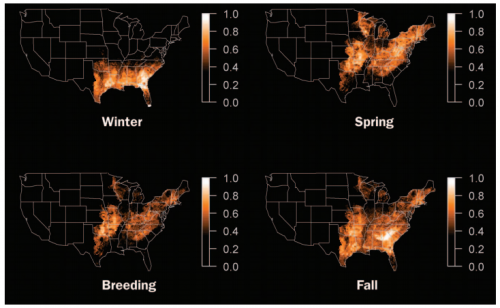 Relative abundance of eastern phoebe (Sayornis phoebe) in the US between 2004 and 2007, based on data gathered by observations of amateur birders. Source: Bonney et al. 2009 p.982

The concept Citizen Science publicly gained prominence by two different approaches. The most prominent approach in environmental science to this day goes back to the US ornithologist Rick Bonney from Cornell University who, starting in the late 1990s, framed Citizen Science as a form of public participation in scientific activity, especially in the form of data gathering done by amateurs (1, 2). This understanding is rooted in the 1960s when Cornell researchers already included volunteers in ornithological research (1, 5). Even before, one could argue that the difference between scientists and amateurs was blurry, as naturalists - for instance in the Victorian age - were often not trained scientists yet a vital source of data (8).

A second famous approach is based on the work of UK sociologist Alan Irwin who, in 1995 (see Key Publications), framed Citizen Science as "developing concepts of scientific citizenship which foregrounds the necessity of opening up science and science policy processes to the public" (Riesch & Potter 2014, p.1), focusing on the role of citizens as stakeholders in informed decision-making processes. 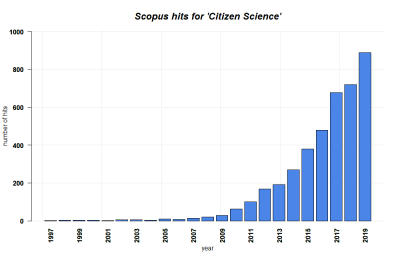 Partly due to these different backgrounds of the concept, “[t]he meaning of "citizen science” is in fact not very clear, particularly when formulated on a science policy level, where it is often defined too broadly without making the distinctions that scientists work with” (Kullenberg & Kasperowski 2016, p.2). Terms such as 'participatory science', 'civic science' or 'community-based monitoring' may also be understood as a form of Citizen Science (1).

Today, Citizen Science is frequently used in biology, conservation and ecology (topics include e.g. birds, insects or water quality), followed by geographic information research and epidemiology (1, 2, 6, 8). It has also found other fields, including Astronomy, Agriculture, Arts and Education (see for example this agricultural study and this participatory approach in Astronomy.) Its presence in scientific publications has increased significantly since the early 2000s, which may be attributed to an increased usage of digital platforms for citizen engagement (1).

Annotation: While the following explanation of Citizen Science focuses on Rick Bonney's approach of amateurs gathering data, the differences between the two predominant understandings will be addressed below.

In the sense of Bonney, Citizen Science describes a form of data gathering that is done by amateur enthusiasts in the field, in cities or gardens. Observations are noted in data forms based on instructions in pre-determined protocols stating the how, when and where of data gathering (4). The data are transmitted online to the researchers and can often be accessed in form of visualisations (e.g. maps) by the contributors afterwards. The intended outcome of a Citizen Science project can range from increasing general data availability and scientific outreach to solving specific local problems or promoting public interest and knowledge on a certain topic. (7)

Citizen Science's unique characteristic is that it enables researchers to sample data across different scales - from regional up to global spatial scales - as well as repeated measurements spanning several years. This allows a scaling of data based on contribution of many participants, allowing a broader and more holistic perspective that would be not possible solemnly on the workload of the researchers. Bird-watching may take place in gardens of a smaller area for one season while the method can likewise integrate geographic information upscaled to a global scale over several years. Often, the collected data is numeric, e.g. number of birds counted, and at which date. This allows to accumulate larger observations about bird migration.

Differences between Irwin and Bonney

Complexity of the method and the analysed data

Open questions for the method

Possible future developments - thoughts about the future of the method

(7) Wiggins, A. Crowston, K. 2011. From Conservation to Crowdsourcing: A Typology of Citizen Science. 2011 44th Hawaii International Conference on System Sciences.

Retrieved from "https://sustainabilitymethods.org/index.php?title=Citizen_Science&oldid=6266"
Categories:
This page was last edited on 17 August 2021, at 02:20.
Privacy policy
About Sustainability Methods
Disclaimers