In short: The bootstrap method is a resampling technique used to estimate statistics on a population by resampling a dataset with replacement.

The bootstrap was introduced by Brad Efron in the late 1970s. It is a computer-intensive method for approximating the sampling distribution of any statistic derived from a random sample.

A fundamental problem in statistics is assessing the variability of an estimate derived from sample data.

To test a hypothesis researchers need to sample from population. For each sample results can be different, therefore to estimate population properties researchers need to take many samples. This set of possible study results represents the sampling distribution. With it one can assess the variability in the real-sample estimate (e.g., attach a margin of error to it), and rigorously address questions.

The catch is, that it is costly to repeat studies, and the set of possible estimates is never more than hypothetical. The solution to this dilemma, before the widespread availability of fast computing, was to derive the sampling distribution mathematically. This is easy to do for simple estimates such as the sample proportion, but not so easy for more complicated statistics.

Fast computing helps to resolve the problem and the main method is Efron’s bootstrap.

In practice, the bootstrap is a computerbased technique that uses the core concept of random sampling from a set of numbers and thereby estimates the sampling distribution of virtually any statistic computed from the sample. The only way it differs from the hypothetical resampling is that the repeated samples are not drawn from the population, but rather from the sample itself because the population is not accessible.[1]

Bootstrapping is a type of statistical resampling applied to observed data. This method can be used to determine the sampling distribution of a summary statistic (mean, median, and standard deviation) or relationship (correlation and regression coefficient) when these sampling distributions are extremely difficult to obtain analytically.

There are two main ways in which the bootstrap technique can be applied. In the "parametric" method, a knowledge of the data’s distributional form (e.g. Gaussian and exponential) is required. When it is available, such distributional information contributes to greater precision. In the more common "nonparametric" version of bootstrapping, no distributional assumption is needed.

Bootstrap methods are useful when inference is to be based on a complex procedure for which theoretical results are unavailable or not useful for the sample sizes met in practice, where a standard model is suspect, but it is unclear with what to replace it, or where a "quick and dirty" answer is required. They can also be used to verify the usefulness of standard approximations for parametric models, and to improve them if they seem to give inadequate inferences.

Bootstrapping involves drawing a series of random samples from the original sample with replacement, a large number of times. The statistic or relationship of interest is then calculated for each of the bootstrap samples. The resulting distribution of the calculated values then provides an estimate of the sampling distribution of the statistic or relationship of interest.

Notice that the replacement allows the same value to be included multiple times in the same sample. This is why you can create many different samples.

This is the basic algorithm for resampling with replacement:

The resulting sample of estimations often leads to a Gaussian distribution. And a confidence interval can be calculated to bound the estimator.

For getting better results, such as that of mean and standard deviation, it is always better to increase the number of repetitions.

Why is the resample of the same size as the original sample?

The variation of the statistic will depend on the size of the sample. If we want to approximate this variation we need to use resamples of the same size.

The bootstrap setup is as follows:

Then the bootstrap principle says that:

Our real interest is in point 2: we can approximate the variation of 𝑢 by that of 𝑢∗ . We will exploit this to estimate the size of confidence intervals. [4]

Bootstrapping may be used for constructing hypothesis tests. It is an alternative to statistical inference based on the assumption of a parametric model when that assumption is in doubt, or where parametric inference is impossible or requires complicated formulas for the calculation of standard errors.

R programming language is a strong tool for bootstrap implimintation. There is a special package Boot [5] for bootstrapping. For code transparency, in the examples below we will use base R.

Using R, we will try to reject the null hypothesis that weight of chicks does not differ for casein and meat meal types of feeding.

To understand if two diets actually influence on weight differently we will calculate difference between mean values.

For the second estimate we choose difference between medians.

For reference we are going to apply to our dataset three classical approaches to hypothesis testing. To compare two means we use t-test:

For comparison of medians Wilcoxon rank sum test is suitable:

Kolmagorov-Smirnov test is helpful to understand whether two groups of observations belong to the same distribution:

Now is the time for bootstrapping. For good performance of resampling the number of samples should be big.

To understand if the differences between means and medians of two different groups are significant we need to prove that it's highly unlikely that this result is obtained by chance. Here we need a help of p-value.

Lets find p-value for our hypothesis.

Interpretation: Out of the 10000 bootstrap test statistics calculated, 922 of them had test statistics greater than the observed one. If there is no difference in the mean weights, we would see a test statistic of 46.67 or more by chance roughly 9% of the time

690 of bootstrap median differences are greater or equal than observed one. 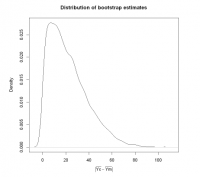 Therefore, classical and bootsrapping hypothesis tests gave close results, that there is no statistically significant difference in weight of chicks with two diets (casein and meatmeal). However p-values are pretty low even with such little sample size. Even if we failed to reject the null hypothesis, we need to test it again with bigger sample size.

An important task of statistics is to establish the degree of trust that can be placed in a result based on a limited sample of data.[4]

Now we are going to generate bootstrap samples separately for casein sample and meatmeal sample. 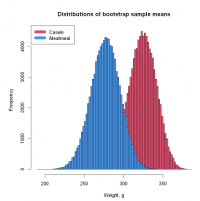 We can see that bootstrap sample means are normally distributed. Mean of the bootstrap distribution is equal to the mean of original sample.

Next step is calculating differences in means and medians among bootstrap samples of casein and meatmeal.

We are 95 % confident that the mean weight for casein diet is between 3.73 g lower up to 97.01 g higher than for meatmeal diet.

We are 95 % confident that the median weight for casein diet is between 22 g lower up to 116 g higher than for meatmeal diet.

We can see that both intervals contain 0. From this we can deduce that differences of the means or the medians are not statistically significant.

Bootstrap methods offer considerable potential for modelling in complex problems, not least because they enable the choice of estimator to be separated from the assumptions under which its properties are to be assessed.

The computation can not replace thought about central issues such as the structure of a problem, the type of answer required, the sampling design and data quality.

Moreover, as with any simulation experiment, it is essential to monitor the output to ensure that no unanticipated complications have arisen and to check that the results make sense. The aim of computing is insight, not numbers.[2]

Over the years bootstrap method has seen a tremendous improvement in its accuracy level. Specifically improved computational powers have allowed for larger possible sample sizes used for estimation. As bootstrapping allows to have much better results with less amount of data, the interest for this method rises substantially in research field. Furthermore, bootstrapping is applied in machine learning to assess and improve models. In the age of computers and data driven solutions bootstrapping has good perspectives for spreading and development.

Article. A Gentle Introduction to the Bootstrap Method

Article. Jim Frost. Introduction to Bootstrapping in Statistics with an Example

The author of this entry is Andrei Perov.

Retrieved from "https://sustainabilitymethods.org/index.php?title=Bootstrap_Method&oldid=5956"
Categories:
This page was last edited on 30 June 2021, at 16:33.
Privacy policy
About Sustainability Methods
Disclaimers