Lego can be a tool in a Design Thinking approach to prototype research ideas, haptically test setups and explore team settings and interactions. The strength of Lego Serious Play lies in group settings, where Lego can serve as a boundary object to allow team members to interact, allowing for a reflexive interaction. Lego is playful, many remember it from childhood, and it can trigger people to challenge their underlying assumptions. Through the haptic interaction people are enabled to interact more than if they would be just talking. Originating in management, Lego Serious Play can be used in any sort of research setting, and is suitable for disciplinary design settings yet particularly helpful in transdisciplinary research modes. The structure of Lego can help structure the research. Lego can be thus be used as a catalyst for a team to develop research together.

Lego Serious Play can be seen more as a way and not a goal. The goal can be bluntly put to
1) facilitate people to brainstorm in a smaller (3-15) group setting about research
2) integrate knowledge in a room in a non-hierarchical and enabling space
3) create research designs, workshop settings or the architecture of larger research projects.

The goal to this end is not so much the final Lego model, but more the way that leads to it.

First of all, you need some Lego. Personally, I think the Lego Serious Play sets are not really necessary. Instead, any collection of Lego will do, as long as you do not have a Lego expert who will be missing this specific piece from his childhood. Find a large table or a clean ground space (blanket?) where everybody can sit comfortably for a long time. Put the Lego in the center, and make it clear, that everybody can and should be equally engaged. Ideally, there is a moderator who only intervenes in times of crisis or may engage people by asking specific questions. The process is still often led by hierarchies, yet this should ideally be avoided. Here I present three approach show I used Lego in the past in research settings.

The first example shows how Lego can be used in a Team setting, for instance in management. The original Lego Serious Play approach focuses on business settings, where hierarchical management structures, habitual thinking and rigid systems often prevent change. Lego Serious Play has proven to be valuable to transform such systems in a playful way. It serves both as a prototyping tool as well as a reflexive setting, allowing for system change and the empowerment of the individual. A good starting point follows three steps (in accord with Kristiansen and Rasmussen 2014): 1) Get the knowledge from the room. Everybody should contribute their perspective, along other to understand their knowledge and perspective. 2) Construct a system. Try to bring the different parts of the knowledge together, so that people will jointly construct a model of the system, showing what is relevant and where connections and interactions are. 3) Link the system and the individual. By trying to create a connection between the individual perspective and the system a new team hierarchy as well a a reflection of the role of individuals in the team or system can be created. This approach was the original proposal of Lego Serious Play, and aims to build better business. More concretely, it is about creating more reflexive and interactive settings in the world of business. 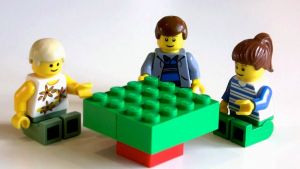 Lego can bring people together in a non-hierarchical manner. Source: seriousplayeducation, YouTube

The second example builds on the creation of a research design for a larger project. Large research projects often contain several PhD students, which within most empirical research - as an example - write at least three scientific papers. Hence a project with three PhD students creates in a utilitarian calculation knowledge in the form of nine papers. Of course, other forms of knowledge will also be created, but this is at Leuphana in the Faculty of Sustainability what students have to deliver to be able to hand in their dissertation.

I typically build two models in such a setting. One model for the PhDs, where each color represents one PhD student. There, links can be created between different papers of the PhDs, visualising where interaction are, and how the larger project may make sense. I would consider a project where you have three stacks of bricks that are completely unconnected a failure. There should be a justification and logic on why these PhDs are together in a larger project.

The second model I often create differentiates between data, analysis and interpretation, showing a methodological differentiation. This is helpful if certain data feedbacks into later papers, or if two papers use the same analysis, but with different data. This can help to identify synergies in the project. Creating such models of projects can especially be also good at the beginning of a project to create a joint recognition of the different milestones - or Lego bricks - of the project.

The third example is for planning one specific sampling within a research project. Stakeholder Mapping can be aided by Lego figures, and out of such a stakeholder system, several bricks can be located to show how many interviews are conducted, and where. These bricks can then be combined, and the interview campaign can be logistically planned. This can also be amended by a prototyping of the analysis, checking whether the sample number is large enough and if the knowledge saturates are a specific point. The Lego bricks can thus also represent units of knowledge, that can be integrated into a three dimensional plots during the interview campaign to visualise not only the process, but also the progress and the information that was already gathered.

Lego as a facilitation tool

Lego can be a serious boundary object within research settings, and can help to reflect within a team, and integrate the knowledge and perspectives in the team. It is important that the team agree that they want to try this out, thus that people do not feel pressured into this format. In addition, it has to be acknowledged that this approach creates a bias towards people that are familiar with Lego, which is why an inclusive and encouraging facilitation is relevant. The possibilities of the Lego Serious Play approach are endless, and it is up to the team members how Lego is being utilised. Try it out!

Retrieved from "https://sustainabilitymethods.org/index.php?title=Lego_Serious_Play&oldid=5932"
Categories:
This page was last edited on 30 June 2021, at 13:43.
Privacy policy
About Sustainability Methods
Disclaimers